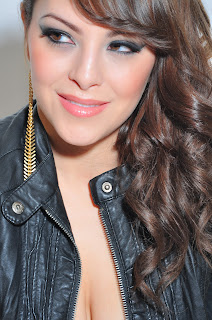 Chase: “All right everybody, this is Chase March. Daddy J is on the boards. And we are lucky enough to have Mala Reignz on the phone.

You can download this show for free, stream it with the player below, or just continue reading. Thanks!

Chase: “I first took notice of your music with OMG and your video for that song and I was really blown away by it.”

Mala: “Oh, thank you.”
Chase: “I thought it was amazing what you did with that video because you break a lot of the stereotypes of female emcees. In that video, I find you’re feminine without having to be seductive or suggestive at all. And you’re just spitting and it’s really cool to see that coming from a female on the mic. What do you have to say about the barriers of being a woman and trying to do rap music?”
Mala: “There’s expectations and a lot of stereotypes, as you said. There’s either the over-sexified vixen and if that’s not the case, a lot of times these girls try to portray themselves as dudes. They think they have to be at the complete opposite end of the spectrum. There’s no middle ground with a lot of them, and that’s only because that’s what the expectations are. I think that if people weren’t so close minded about this, then we wouldn’t have so many of the same types of artists coming out all the time, because it didn’t used to be this way.
When it comes to the stereotypes, I kind of have to try to ignore them as much as I can. I just do me, you know what I mean? That whole video was just a natural thing for me. I’m very feminine. I’m just me and I just want to be myself completely when I do this, when I do what I love to do, and if that means dressing up one day, or some times I’ll just wear some kicks or sneakers, but either way I’m still a woman and I think that’s the most important part, to just portray myself as me, as a woman.
I don’t think I need to be a vixen. I don’t think I need to be raunchy or so sexed to an extreme extent. I’m an every day girl and I want every day girls to see me and see what I do and be like, ‘Oh, that’s cool, she’s just like me.’ I’m hoping that is what women and girls see when they see me.”
Chase: “I know what you’re saying Mala. Rapping is about representing yourself. And although it’s kind of a cliche to ‘keep it real’ but it’s nice to see that you are confident enough to show yourself and different sides of yourself too.”
Mala: “I just think, when it comes to artists, the ones that you fall in love with are the ones who are vulnerable and they’re not afraid to show every side of themselves. And those are ones that last forever, even after they die because those are the ones people appreciate and remember the most because they can identify with you on all aspects, they become more human, you know what I mean?
I see artists nowadays who are just so one-dimensional.  It’s partying all the time and that’s all you really see from them. It’s like, is that real? Are you really a person because who lives their life like that every single day? I understand that you have to give an image and everything else, but me, personally, I look up to people who I can identify with when the times are hard and when the times are great. I just try to be myself as much as I can possibly be.”
Chase: “You were in the Unsigned Hype Column of Source Magazine?”
Mala: “Yeah, this isn’t 100% confirmed, but this is what I was told by the people at The Source, I’m the first solo female rapper to be featured in Unsigned Hype ever.”
Chase: “That is awesome! Congratulations on that!”
Mala: “They’ve had female groups but I’m the first solo female rapper, so little piece of history there. That makes me feel good. That was in July of last summer and was a really big accomplishment for me.”
Chase: ‘Well, yeah, there’s a lot of huge cultural icons in hip-hop who got their start on that page. That could just be showing that you are about to storm the industry.”
Mala: “I hope so. I hope people take to me.”
Chase: “I use that word very deliberately because your E.P. Was called ‘The Calm Before the Storm’ and that’s the EP that has OMG (dum da dum), however it’s billed.”
Mala: “The story behind the title change is that it was originally called “OMG.” We dropped the project and then Usher came out with his “OMG.” It’s okay to have the same song title as long as they’re not out at the same time. So we just said, ‘lets go along with the hook. The hooks says Dum Da Dum, we might as well just call it Dum Da Dum,’ but for those who liked the song as knew the song as “OMG” we keep it in parentheses.”

Chase: “Nice, I want to spin that one right now. It’s one of my favouite songs. I really love. We’ll drop that song right now. This is “Dum Da Dum (OMG)” by Mala Reignz off the Calm Before The Storm.”

Come back tomorrow to Read Part 2!

Keep Shining – Together We Are Fireworks

DJ Chase March on The Come Up Show