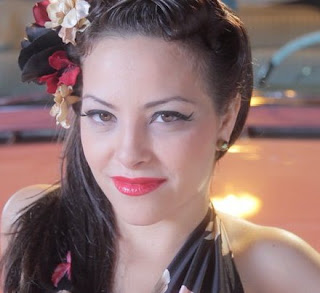 Chase: “All right, we are back with Mala Reignz. If you’ve missed any of the show so far, you can download it for free, read it from the very beginning on the blog, or stream it with the player at the bottom of this post.

So, we just heard the track ‘I’m the Bomb,’ which is going to be on Mala Reignz’ new mixtape. And we are lucky enough to have her on the phone. How’s it going Mala?”
Mala: “Everything is really good. I’m glad to be on the phone with you guys, so thank you for taking the time to speak with me.”
Chase: “Definitely. I’ve been a fan of yours ever since I saw that first video, so I am looking forward to hearing that whole tape when it drops. You’ve done a lot of collaborations on this tape.”
Mala: “This one is a full collaboration project with myself and Qwest. We have a couple of other features but we wanted to keep it showcasing me and him specifically.”
Chase: “How do you go about your writing process?”
Mala: “To be honest with you, and this is funny, a lot of times I write in the bath tub. It’s like going to a spa. It’s so relaxing for me. I need to be relaxed. I can’t write when I’m stressed out. It just doesn’t work for me. So I just try to make the setting calm and relaxing, and I’ll play some beats and whatever stands out for me is what I’ll run with at the moment. I try not to plan too much in advance when I write.
What I do sometimes is, I’ll come up with a song concept that I’ll just write down. I have a place where I keep all my song concepts, so if I can’t think of anything when I’m writing to the beats, I’ll refer back to that and see if anything fits. But, for the most part, I try not to plan it. I just let the beat talk to me and whatever it tells me to do, that’s what I do.”
Chase: “That’s one thing I really like about the writing process, it just comes to you like from some unknown place.”
Mala: “Yeah-“
Chase: “It’s pretty amazing how that happens. If you could collaborate with anybody right now, living or dead, who would you choose?”
Mala: “Oh man, I always wanted to do something with Stevie Wonder. I think that would be so crazy. He’s one of my favourite artists.
I really like Pink and I like what she stands for. I think that would be a crazy collaboration.
But, of course, my favourite emcee of all time is Jay-Z so if I could do something with him, Wow! Imagine.”
Chase: “That’s an interesting list of artists you got right there. I like when I ask that question and don’t get rappers as a response. Quite often it surprises me at first because I expect to hear rappers, rappers, rappers, and then I get an R&B singer and a Pop artist as a response.”
Mala: “I always like to hear when people do collaborations outside of their genre, and sometimes that makes an amazing record. I would love to try something different. I don’t want to do the same thing over and over again, or things that have already been done by other people. I want to try and push myself to the limit and go outside of my comfort zone.”
Chase: “I’ve noticed that with some of your tracks because some of them sound more underground and some of them sound more commercial. There’s a range there. They’re not all the same, which is good because that can get boring for the artist and the listener. It’s good to see that you can try to stretch and get yourself into different vibes and forms and stuff like that.”
Mala: “Yeah, I’m always trying to experiment and try something new. A beat that I like today, I might not like tomorrow. And I get bored really easily. I always gotta try and switch it up.”
Chase: “That’s cool! Well, it has been really nice talking to you. I’m so glad that you phoned in and I hope people will be checking for you new mixtape called…”
Mala: “Anticipated. And it will be on sale at MalaReignz.com and my posters will be for sale too. I know you guys are out in Canada but I will be celebrating my birthday party (editor’s note – you missed it guys, sorry) so maybe if you have any listeners from New York or New Jersey they’ll be able to come out.”
Chase: “Well, Happy Birthday! That’s awesome. Unfortunately, we won’t be able to get this to air tonight. We’ve got to chop it up and then we’re heading to Toronto for the House of Pain reunion show. How crazy is that, eh? Hip-hop has grown up not that we can have reunion shows.
I’m still really sad that Run-DMC didn’t have one because I know they were planning one before the untimely demise of Jam Master Jay, rest in peace. That would have been amazing to see.”
Mala: “I just saw Reverend Run. He performed at the XXL magazine release. That was nice.”
Chase: “I just love Run-DMC. I think they are the best group ever. I saw them play once in 1994 in Toronto. It was an amazing show. I’m glad I got to see that.”
Mala: “All right!”
Chase: “Well thanks a lot Mala Reignz! It’s been a pleasure, We’ll spin some more of your tracks here on DOPEfm and hopefully people will check you out wherever they can hear you.”
Mala: “They can go to Facebook.com/MalaReignz, Twitter.com/MalaReignz, I don’t know who goes on MySpace anymore but I’m there too, and they can also hear music on ReverbNation.com/MalaReignzScholar. There are plenty of places to check me out but make sure you go to the website MalaReignz.com.”
Chase: “Well, thank you. It’s been a pleasure.”
Mala: “Thank you too. Take care everybody!”
Chase: “Peace!”