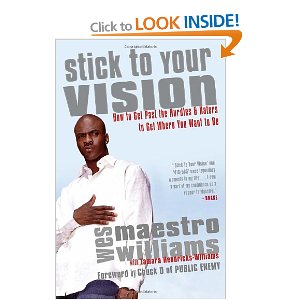 Maestro Fresh Wes is a hip-hop pioneer. He was the first Canadian rapper to have a Top 40 hit and was the biggest selling hip-hop artist out of Canada prior to Drake. Even people who don’t consider themselves to be rap fans are familiar with his work. “Let Your Backbone Slide” still bumps at parties and clubs all over the world.
You might know him as an actor as he has been in countless movies and television shows. I am really enjoying his portrayal of the cool and popular teacher on the CBC series, Mr. D.
Wes Williams can now add one more title to his resume, author. Stick to Your Vision: How to Get Past the Hurdles and Haters to Get Where You Want to Be is more of a self-help book than a hip-hop memoir but for those of us familiar with this iconic rapper, we do get some great personal stories from his long and illustrious career.
Maestro came out the gate strong with his debut album but never managed to achieve the same level of success with his follow up albums. It didn’t stop him from trying, branching out, and continuing to create art whether through music, film, or television. He’s definitely had his share of ups and downs and he uses these stories to help inspire us readers to stick to our own vision.
The book is named after his hit single, Stick to Your Vision. YouTube won’t allow for emebedding of the video but you can go here to watch it.
This is another one of my favourite videos. It’s called “Hard to Be Hip Hop” and it is a duet with fellow Canadian rapper Classified.

You might want to check out the other hip-hop memoirs I’ve read this year as well.

Too Attached to Image

In Depth and Exclusive with Wildelux