The red carpet was hectic at the 2011 Stylus DJ Awards this year. We had some technical difficultlies but managed to talk to a dozen artists, including the legend, Wes Williams, better known as Maestro Fresh Wes. Here is a transcript of the interview.

Chase: “This is Chase March and Daddy J from DOPEfm. We’re really honoured to talk to you because we wouldn’t even have a scene without you man. You put Canadian hip-hop on the map.”

Maestro: “I’m continuing to do my thing, supporting the DJs, and I’m about release a brand new single.”

Chase: “It’s so cool to see that you are still doing your thing. I got the mixtape celebrating your twenty years in the game. It was called 20 / 20 – twenty years with twenty classic joints on it.”

One of your biggest hits was ‘Stick to Your Vision.’

Chase: “We just talked to the producer of that track, 2 Rude.”

Chase: “You’ve been doing a lot of things. You just wrote a book recently as well.” 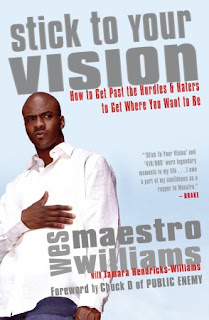 Maestro: “The book is called, ‘Stick to Your Vision.’ It’s from Random House Publishing and it just went into paperback. I’m really excited about that. I’m working on a brand new album too. Things are happening. My foundation is hip-hop, and the foundation of hip-hop is deejaying. Rakim said, back in the days, that he was gonna nominate his DJ for president.”

Chase: “That’s why is really nice to see these Stylus DJ Awards. It’s nice to see them honouring someone who truly deserves it, like yourself. But, it’s also nice to have this focus on the DJs and the producers because they often don’t get a lot of shine. The guy on the microphone gets most of the shine.

As far as hip-hop legends go, sometimes they lose their appeal to a younger generation but I don’t think that has happened with you. You have a whole bunch of new fans just from the work that you’ve done with Classified.”

Maestro: “There are always peaks and valleys, no matter what. And now that I’m working on a brand new album, it’s like I’m reintroducing to a lot of fans.”

Chase: “I think in some ways, it will be a reintroduction. But I’ve got students in my class who are big fans of Classified and they love ‘Hard to Be Hip-Hop.’ That song is amazing, and the video is really cool too. I love what you guys do in that.”

Maestro: “Thank you. I hope you like the new single too.”

Chase: “I’ll definitely be checking for that. I always check for you. Maestro Fresh Wes, a legend in Canadian hip-hop. Thanks, man. Peace!”

Know Your History: A Spotlight on MC Lyte