The public library is a great resource for audio books. I go there often to find stuff to listen to in the car.
It’s great being able to immerse yourself in a story while driving. If often makes the commute seem shorter and gives you something to look forward to as you want to know what will happen next in the story.
I like going to the teen section of the library. There you can find some great YA fiction.
When I saw this audio book, I was immediately intrigued. 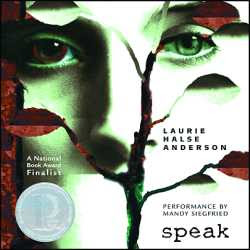 It wasn’t the author, the title, or even the cover art that got my attention though. It was the narrator.
My favourite audio book of all time is Heartbeat and it is also performed by Mandy Siegfried. I absolutely loved that sound of that book and thought it would be nice to hear something else done by the same narrator.
Speak is a novel by Laurie Halse Anderson.
I listened to Mandy read the story from the first person perspective of a young girl in high school. I imagined that this was the same girl from Heartbeat, who at the time of that story had been in middle school.
Just like that earlier book, the girl in this story recounts her time in art class. She has a long term project to do in that class.
There were a few other comparisons that I made that other readers / listeners probably wouldn’t. After all, this is not a sequel to Heartbeat, as much as I wanted it to be.
That being said, I really enjoyed this novel. (spoiler alert)
The story revolves around a girl who has become an outcast at her high school. For the first part of the novel, we don’t know what exactly happened that made people turn on her.

Later on in the story, we find out that she was raped during a house party. She was only thirteen and didn’t know what to do, so she called 911. The party was then broken up by the police but she didn’t stay to talk to the authorities. She didn’t even report the crime. She didn’t tell anyone, She didn’t speak about it at all.

The story is about the struggle to find her voice and speak.

I hope people speak out and against rape. I hate the fact that it even exists. I don’t understand how anyone could possibly commit such a heinous act. I hate how the victim will sometimes get blamed. I hate everything about it.