I love mix tapes. I used to make them all the time. I made tapes off of the radio. I taped my favourite songs from a variety of different tapes or records. And then I got really serious about it.

I bought a mixer and used my CD walkman and my regular mini-component system to make tapes where all of the songs blended into each other. Songs never faded out on my tapes. The songs flowed into each other and formed a 90 minute wall of sound, only interrupted by the short amount of time it took to flip over the cassette. It was beautiful.

I even bought a state of the art tape deck that cost close to $300. It’s insane thinking that I paid that much for a tape deck when you can get an entire computer for that price now. But I bought it and I loved it. I still have it. The best thing about it is that you could record onto two tapes simultaneously.

I still play tapes from time to time in my house. I’m playing one right now that I made in January 2000. But tapes aren’t the portable magic that they used to be. My car doesn’t have a tape deck. I don’t have a walkman. And most people don’t even have tape decks anymore. 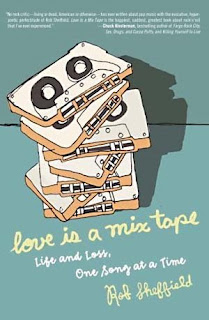 I still love the mix tape though. That’s why the book Love is a Mix Tape by Rob Sheffield really jumped out at me. Every chapter starts out with a picture of the cassette label so we could see what he had on both sides of that particular tape. As I flipped through the book, I recognized some of the songs on the various tapes mentioned throughout the book.

In the story, the narrator recounts a love affair with music and his wife. It’s a really well told story and was quite compelling. I know I haven’t had a recommended read in a while but this one definitely needs to be added to the list.

Not only was it a good read, but it has got me listening to all my old tapes again. They are still just as magical as they were back then. I love them as much as I used to. Although, now the tapes have a way of transporting me back to a more innocent time in my life. A mix tape is a time machine. How about that?

Love is a Mix tape

3 thoughts on “Love is a Mix tape”