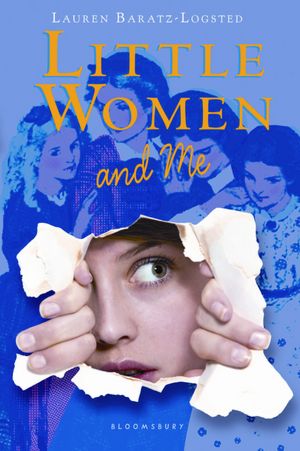 I was at the library and this book called to me.

It was sitting on the top of a bookcase, proudly on display. It seemed to be saying, “Hey, Chase! This is just the book you want to read.”

Who am I to argue with a book?

The 1994 movie and this 2012 book are based on the original novel by Lousia May Alcott of the same name. It was a great story and I really enjoyed reading it and its sequels after seeing the Hollywood version.

I think that is the reason why I gravitated to this book. It is about a middle sister named Emily March. She just happens to have the same name as the fictional family in Little Women.

Her teacher give her an assignment in which she is to chose any book and talk about something she would have changed in the story. She immediately thinks of two things in Little Women that never sat right with her.

She picks up the book and somehow gets sucked into the story. She has become the middle sister of the fictional March family. Everyone treats her as if she has always been part of the family.

Emily thought that she was merely dreaming, but when she doesn’t wake up and return to 2012, she realizes that she is indeed trapped in the novel. She then remembers the two things she wanted to change in the original story and tries to make things right.

The story follows the plot of the original novel very well with the only change being that Emily is along for the ride. She is able to change a few things here and there but she can’t figure out  how to leave the fictional world and rejoin her regular life.

She wonders what will happen to her when she runs out of story and the novel ends. She tries her best to exist in the fictional world and to change the two things she didn’t think were right with the story.

I won’t tell you anymore about the story because I don’t want to spoil it for you. Suffice it to say that I didn’t want to put this book down. It was an amazing read and I highly recommend it. Although, it might be best to watch the movie or read the original book first.

A Novel a Month