A lightning storm imbues several people with super-speed. Most of the new speedsters don’t know what to do with their power. Star Labs opens up a training facility and The Flash even teaches a few of them some of the ropes. His new role of teacher is something that is surprised to find out that he enjoys.

Of course, not everyone decides to use their powers for good. A few people go on a crime spree, but The Flash is able to stop them. One new speedster even discovers Barry Allen’s secret identity. If that weren’t enough, Barry has to discover what is causing the speedforce storm and how to stop it. He also needs to find a way to defeat the evil speedster known as Godspeed.

He decides to enlist the help of Batman. When he visits the Batcave, we see that Gotham’s hero is working on a clue. Apparently, some speedster gave him a smiley face button with a drop of blood on it. For those of us in the know, this is the iconic image from Watchmen. 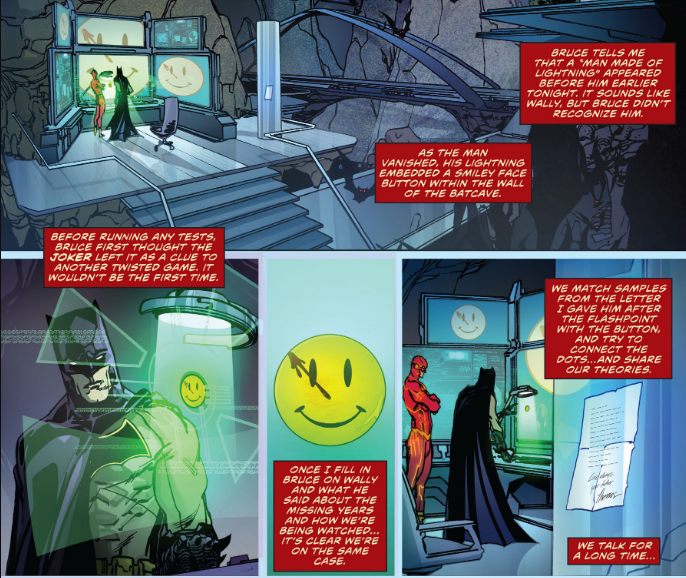 DC has been working on a crossover book, and quite frankly, I have no interest in reading it. The original Watchmen story was near perfect and should probably be left alone. But as I read this, I started to prepare myself for it to happen in this trade paper back. It didn’t. All we got was this little teaser, which was fine with me. This story already had enough excitement without bringing in another fictional world.

I guess if I keep reading this series, I will eventually come upon that crossover. You never know though. I often read comics randomly, depending on what is available at the library at the time. I guess we will cross that bridge when we come to it (see what I did there).