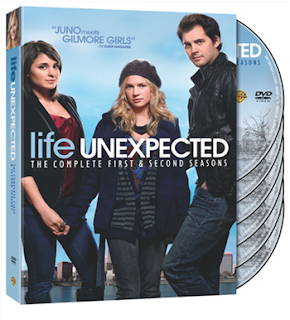 I always borrow DVDs from the library and I’d seen this one on the shelf several times. I had no idea what the show was about, simply because of the way the library had packaged the DVD set, but something about it called to me. I just didn’t have the time to watch it until this summer. But I am so glad I did.

Life Unexpected was a pleasant surprise for me. It was brilliantly written and I fell in love with the characters, especially the main character, Lux Cassidy.

Britt Robertson plays 15 year old Lux, and she unexpectedly shows up at her father’s one day. He had no idea that he even had a daughter. Of course, she wasn’t planning on sticking around. She just wanted his signature so she could apply for emancipation and move out of foster care.

Things didn’t go as expected for Lux either. She ended up getting released into the care of her birth parents. One of whom was a hopeless bachelor, and the other a career-driven loner of sorts. They hadn’t seen each other since the winter formal in high school when Lux was accidentally conceived. Her mother gave her up for adoption but due to a lot of different circumstances, she never did find a good home. The writing makes this all come alive, even though it may sound a little complicated.

It’s a great series, with wonderful writing and brilliant chemistry between the actors. I really was quite invested in the show and am sad now that I’ve worked my way through all 26 episodes and the bonus features as well.

As I watched the DVD, I didn’t realize that this six disc set encompassed the entire series. Life Unexpected originally aired in 2010 and ran for two seasons on the CW Network and I am so thankful that the series finale was able to wrap up the major story lines and give a sense of closure to the whole show. It makes this DVD collection all the more valuable to me. I want to buy it now.

Save My Favourite Show

Joan of Arcadia (in reverse)