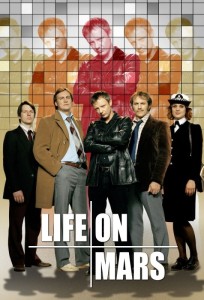 Life on Mars is a brilliant television series that I have only just discovered.

It centres around the character of Sam Tyler, a police officer played by John Simm. In the pilot episode, he gets hit by a car and wakes up thirty years in the past.

He has some visions and hears things that lead him to believe that he is actually in a coma. But try as he might, he can’t get out of his new reality, living as a detective inspector in 1973.

The show completely captured my attention and I worked through all of the episodes very quickly. I had no idea that the show was only on the air for two seasons. As I worked my way towards the end of the second series, it became clear that the show was wrapping up. I didn’t want it to. I had been enjoying it so much and was actually looking forward to more episodes.

The final episode of this series wrapped everything up beautifully. I love a great story and I especially love closure when it comes to television series.

There was an American remake of this series, which absolutely baffles me. I have never seen it, nor do I have any desire too. British television is great. I couldn’t imagine an American version of Doctor Who. It just doesn’t make sense. So , go watch the original and be amazed.