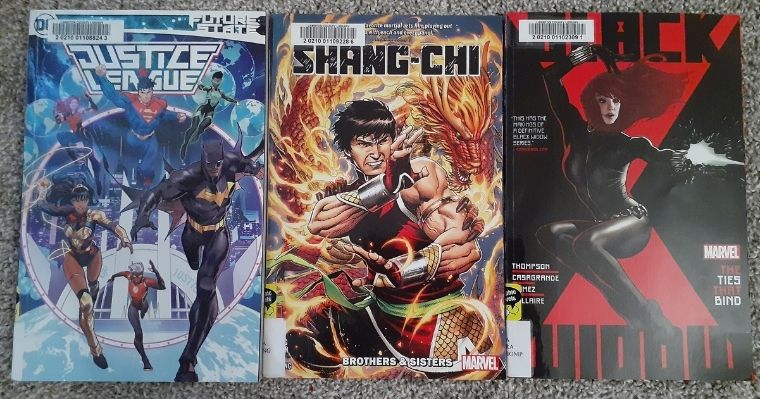 The public library is a great place to read comics for free. Here is my latest haul from the local branch.

This collection seems a little disjointed. It starts off with a two-part story featuring The Flash and the jumps to an Aquaman tale that doesn’t seem connected to it. That story is followed by a magical one featuring Zatanna before we get to a Green Lantern story, and then finally one about the Justice League of the future.

While the book is not that cohesive, it has some great moments. I’d like to see more of the Aquawoman character. Superman’s son trying to figure out how to lead the new team is kind of cool, but the story is much too short for this rather thick graphic novel.

I absolutely loved the new movie and think it is probably the best one of the entire series of Marvel films. I had never read a comic of the character before so I thought it would be a nice read. This book doesn’t continue the story of the film but instead gives us an alternative version of it. I’m not sure I want to read more but I definitely look forward to seeing more of him on screen.

Black Widow – The Ties That Bind

This book was awesome! I’ve already picked up Volume 2 and can’t wait to read more. I was very excited about the character when she was introduced in the second Iron Man film. I’m glad she is finally getting her shine. Her solo film as great and then continuation of that in the Hawkeye series was amazing. Hopefully we get a sequel to her solo film and get to see more of her sister. In the meantime, I will be reading this series. The first volume had action, heartbreak, and a great story. I need to read more.

I read these last year so I’m adding them to My List of 2021 Reads.

Sonya Sahni and the First Grade

Why You Should Tell Your Story

Novel Study Takes to the Track