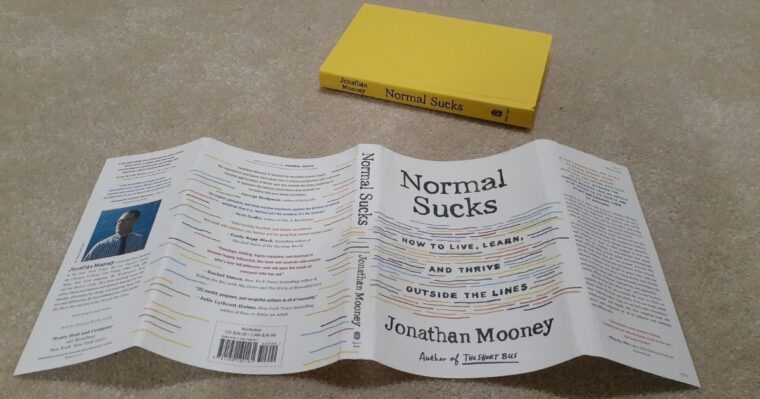 Normal Sucks: How to Live, Learn, and Thrive Outside the Lines by Jonathan Mooney

This book title seemed to fit with my view of the world. I embrace my weirdness and do my best to think creatively and live outside of the box. I thought it might help me get some insights about how to support children inside and outside of the classroom as well. Here are a few of the passages that jumped out at me as I read it.

“Scholars have noted [that] the word normal entered the English language in the mid-1840s, followed by normality in 1849 and normalcy in 1857. This is shocking for a word that masquerades as an ever-present universal truth. When normal was first used it had nothing to do with people, or society, or human behavior. Norm and normal were Latin words used by mathematicians.”

I had no idea that “normal” was a math word that has been taken to the extreme. “Normal” just seems so normal.

The Word Stuck Because It Worked

I always knew that words were powerful. Imagine a world where this concept wasn’t applied everywhere. Imagine classrooms that didn’t have to cater to the normal student.

The strange thing about myself is that despite how I occasionally act and constantly declare anything but, I am indeed normal according to that definition.

One Moment Can Have a Huge Impact

“I decided in that moment (and yes, it’s true that there are moments in your life of lefts and rights, windows of opportunities for change that open and close) to use the anger that was consuming me to fuel me instead. I became an English major and enrolled in four literature classes. I would do whatever I had to do to prove them wrong.”

I already knew this to be true and can think of a few turning points in my life that happened in one moment.

We Need Coaches, Teachers, and People Who Can Challenge Us

“All of us need other people in our lives to push us over the line between what we know we are not and what we think we might be.”

This is something that makes good teachers great. And it is a role that everyone can fulfill.

“Who someone becomes isn’t up to them; it’s up to all of us. All of these people pushed me out of something that I was trying to be into someone that I was to become. Because of them, I had become a believer in my potential to be someone other than who I was.”

Reject the Concept of Normal

“I’ve come to believe that normal, the word, the idea, and the values it represents, can’t be used, or appropriated, or repurposed but must be rejected, and I want to tell you why . . .

I’ve learned that hands can speak, listening is reading, talking is writing, and that human intelligence and ability are not one thing, but many. Intelligence is not singular but multiple, and it is bigger, stranger, and more wonderful than we’ve all been led to believe. It is a crime every time we ask ourselves how smart a a person is, instead of asking ourselves what makes that person smart . . .

I’ve learned that we are all temporarily able bodies and minds moving in and out of states of ability and disability every day of our lives. Sooner or later we all fall off the center of the bell curve. Our bodies, minds, and lives change. The goal post surrounding what is normal for us will move, and we will lose out own normality if we ever thought we had it. This fact of our lives requires a new ethical, moral, and political philosophy. It requires a new way to live, a new social system. For all of us, normal us just temporary, and we are only visiting—for a fleeting moment—the center of the bell curve.”

The above passages are beautiful. I think teachers everywhere need to consider this. Students can listen to audiobooks instead of reading. They can tell stories aloud instead of writing them or use speech-to-text apps. We can grade students differently or not at all since intelligence can’t and shouldn’t be measured in a singular way. We all go through periods of time where we are not sharp physically or mentally and need to acknowledge that and let it be okay. We need a new way. And we need it now!

I wrote another piece about how Mooney believes schools are failing right now. It’s powerful stuff and I completely agree with him. That’s one of the reasons I’ve made a big change in my life and am not returning to the classroom next week. I’ll be documenting more of my homeschooling journey here and on the Know School website. Stay tuned!

Fake Test – I pranked my class!

Where Are The Desks?