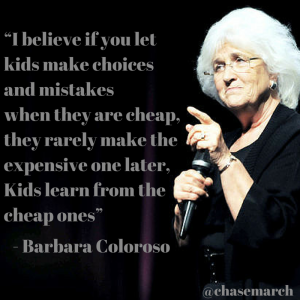 Sometimes as parents and teachers, we are afraid to let our kids make bad choices. We want to steer them in a direction that will avoid a negative consequence. So, we tell them what to do and what to think. But ultimately, this harms them in ways we probably never even considered.

Barbara Coloroso breaks if down in her book, Kids are Worth It!

Give Them Info and Let Them Go

“What kids need instead of being told what to think, is lots of information about themselves and the world around them, and the opportunity to make lots of decisions, including some less-than-wise ones. As long as their decisions are not life-threatening, morally threatening, or unhealthy, let their choices and the consequences of those choices be their own to grow with and learn from.”

There are mistakes that we can let our kids make that don’t cost them a lot. These mistakes may come with minor consequences, but these consequences will help them learn and prepare them for the future. We shouldn’t be afraid of these “cheap mistakes”

“I believe if you let kids make choices and mistakes when they are cheap, they rarely make the expensive one later, Kids learn from the cheap ones”

Build a Strong Sense of Self

Letting our children make the cheap mistakes gives them experience in forming their own opinions. They are not just doing what they are told. You might think that is a good thing, but at some point, kids stop listening to their parents (even if only for a little while) and that’s when trouble can arise.

Lacking a strong sense of self, these teens define themselves only in relationship to whomever they have attached themselves.

Barbara Coloroso has some great advice for parent and teachers in this book. I recommend reading it if you have enjoyed this post! 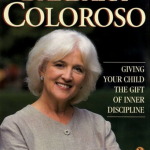