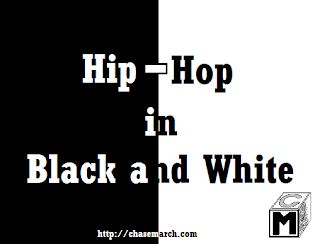 Earlier this year, I was approached to write an article for Word is Bond. The staff over there thought I would be a good choice to write about race relations in hip-hop as a guest contributor.

We thought it would be a good idea to contrast the large white audience hip-hop has to the lack of successful white artists in the genre.

I wrote a rather lengthy article on the topic and realized in the process that it would also work as an episode of Know Your History.

You can stream this show with the player below, you can download it for free, or you can continue reading.

It’s hard to believe it, but when hip-hop first started, it was not a commercial enterprise. There wasn’t a portion of the music business that showed any interest in rap music. For the first five years of its existence, the only recordings made were low quality cassette tapes of live performances.
These tapes were traded and passed around from person to person. Some of these tapes still survive and are cherished by true hip-hop heads. If you are lucky, you can find a few of these gems online or in the basement collection of a friend’s house.
It’s important to remember that hip-hop and rap music are not the same thing. Hip-hop as a culture predates rap music by a few years. Hip-hop didn’t start out as recorded music, it started out with DJs “initiating spontaneous street parties by attaching customized, makeshift turntables and speakers to street light electrical sources,” and as such these DJs effectively “made ‘open-air’ community centers in neighborhoods where there were none.” (Tricia Rose. Black Noise, pg 22)
Hip-hop is all about community. Even today, it is tied into that mentality as crews try to put their “city on the map” and overtly wear their hometown pride wherever they go.
Today, we take it for granted that hip-hop is a global phenomenon but this wasn’t always the case. It started out in the poorest black neighbourhoods of New York. It was territorial even back then as certain boroughs had their own superstar DJs to entertain them. These DJs played music for people to dance to. The DJs wanted to improve their sets and were highly competitive with each other. It wasn’t long before they employed MCs to hype up the crowd and say short pithy rhymes so the DJ could completely focus on the more technical aspects of scratching, blending, and doing tricks.
In these old school parties. MCs would rhyme for long periods of time. Some rhymes would last for twenty minutes. The DJ would continue to blend records and extend breaks so that you would never hear dead air, silence, or a record fade out. The music was continuous and seamless.
It wasn’t long before hip-hop culture moved from party tapes and bootlegs to commercially recorded music. For the first time, rap music could be heard outside of these community events. These records traveled a lot further than the old cassette tapes ever did. They were done in a quality that allowed them to be played on the radio as well which only gave more exposure to rap music.
Rap had now moved out of the community and it had become less of an event. As such, the songs began to get formatted into a shorter amount of time. Nowadays we expect rap songs to be about three minutes long with 16 bar rhymes interrupted only by a repetitive chorus.
Early rap records were much longer and reflected more of what hip-hop sounded like at live community events. For example, the 12” single of Rapper’s Delight has a long version of the song that plays for 15 minutes. The B-side of the single contained the shorter version that clocks in at six and a half minutes, which is still much longer than most records nowadays. The shorter records we are accustomed to hearing came about due to the structure of popular western music and the nature of commercial recordings.
When hip-hop became available outside of New York, it was not easily understood by those outside of the culture. Rap music was initially seen a fad and many people tried to capitalize on this new music that obviously held appeal to a variety of different listeners.
It’s not hard to see that hip-hop is a very popular genre of music. All you need to do is look at all of the radio stations that play rap, all of the downloads (both legal and illegal) and how much of an influence it has had in advertising. Hip-hop is quite literally, everywhere these days.

As Dalton Higgins so aptly put it, “Culture . . . is not something that can be controlled and locked in the basement. Culture travels at the speed of light (or Internet cable lines) and doesn’t respect borders.” (Hip Hop World pg 51)

Hip-Hop in Black and White continues over at Word is Bond. Click through to read more, stream the entire show with the player below, or download it for free.

Know Your History 37 – The History of Radio Broadcasting

A Song to Play at My Funeral