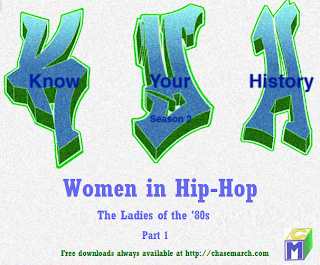 Welcome to Know Your History, your monthly dose of hip-hop knowledge. You can download this show for free, stream it with the player below, or just continue reading.

This is Part 2 of our 3-part series on female emcees. We put together eight hours of radio in tribute to the Women in Hip-Hop for DOPEfm`s broadcast on International Women`s Day earlier this year.

As we discussed in the last episode, women have been involved in hip-hop since its very humble beginnings. We looked closely at only first decade of this art form last time. Today we will be focusing on the second decade and shine a spotlight on the Ladies of the 80s.

Our discussion today needs to start with Roxanne Shanté. Back in the early 80s, she was a fierce emcee. She didn’t need to write rhymes, she was able to just start rapping and improvise entire songs. In hip-hop culture, this is called freestyling and it is a difficult skill that some rappers simply cannot do. It means you have to be in the moment and capitalize on what is happening, what is coming next, and how it all fits together.
Roxanne Shanté was able to do just that to start kick-start her career and forever change the face of hip-hop culture. Pretty impressive for a fourteen-year-old girl from Queensbridge whose name strangely enough was not Roxanne. She just happened to be in the right place at the right time one day when she overheard some men discussing a cancelled concert by the rap group UTFO.
At the time, UTFO had a hit song entitled “Roxanne, Roxanne.” The song was about a fictional girl who would not respond to any of the advances from the guys in the group. As such, they called her “stuck up.” They couldn’t believe that she wouldn’t respond to their fame, raps, or charm. They even go on to insult her family in the song. It was a catchy song not aimed at anyone in particular. It was a story rhyme and wasn’t meant to start any kind of war.
What happened was, legendary producer Marley Marl, radio personality Mr. Magic, and Tyrone Williams were angered over the cancellation of the UTFO show. Shanté overheard their discussion, and knowing who they were, suggested that she could record a song in response to “Roxanne, Roxanne.” They all agreed it was worth a shot.
Shanté assumed the persona of Roxanne and acted like a woman scorned by what they men had said about her on the record. As legend has it, Shanté recorded the song in one take. It was laced with profanity, had a real street edge to it, and was unlike anything we had heard from a female emcee up to that point.
The song was rerecorded with a new beat and less profanity so it could be released as a single. Both versions of this song came out in 1984 but I want to play you the original right now.
Listen to this song, and we’ll be back to explore how this record sparked an interest in female emcees and paved the way for some legendary female rappers. This is Know Your History’s dedication to the Ladies of the 80’s. This is Chase March for DOPEfm. This is “Roxanne’s Revenge” by Roxanne Shanté. We’ll be right back.
That record right there sparked what is known as the Roxanne Wars. It made Roxanne Shanté a bonafide hip-hop star and also established the tradition of the answer record. Tons of people tried to follow in her footsteps by releasing their own response songs. It got so convoluted that there were over one hundred such songs. I haven’t heard them all, and quite frankly, I don’t have any desire to. Roxanne Shanté did it first and she made a memorable record, and made her mark on the industry.
Of course, UTFO didn’t like this at all. They manufactured their own Roxanne, much like Shanté and Marley Marl had done, to bring the Roxanne Wars to an end. In my humble opinion, The Real Roxanne wasn’t as strong a track as the one Shanté did. However, it did make The Real Roxanne a star as well.
I plan on dedicating an entire episode of Know Your History to the answer record and will focus on the Roxanne Wars some more in that show. So today, I won’t play that track for you. Instead, I will play her biggest hit. This song was released in 1986 and reached number 24 on the Billboard. It’s called Bang Zoom (Let’s Go Go) and features the production and DJ skills of Howie Tee.
Listen to this song and we will continue our coverage of the Ladies of the 80s with some true hip-hop legends who have managed to have lengthy careers and pave the way for female rappers. This is Chase March, stay tuned because, “You better Know Your History!” We’ll be right back.

I have a hard time calling her The Real Roxanne since she most definitely wasn’t the first Roxanne. Roxanne Shante put a record out a year earlier and kept it pretty real in the process. She was a writer, an avid freestyler, and she adopted the persona of Roxanne in a real and honest way. In my humble opinion, she deserves the title of “The Real Roxanne.”

Of course, this little battle and controversy that started with one UTFO record, helped call attention to female rappers in a brand new way. There had always been female rappers but up until about 1984, none had managed to sell a lot of records.

That all changed with a group that originally called themselves Super Nature. There were three ladies in this group; 2 MCs and 1 DJ. Coincidentally, they established themselves with an answer record as well. “Tha Show Stoppa” was a response record to Doug E. Fresh and Slick Rick’s “The Show.”

The group I am talking about went on to release 5 very successful albums. They were the first female rap group to earn a platinum record, and they did so with their debut “Hot, Cool, and Vicious.” They sold millions of records worldwide over their careers. Their 1993 release even went 5-times platinum. But we are getting ahead of ourselves here.

This program is dealing with the Ladies of the 80s. So, let’s play the song that launched their career. This is “Tha Show Stoppa” by Salt N Pepa.

That was “Tha Show Stoppa” by Salt N Pepa from their debut album “Hot, Cool, and Vicious.” It was the first commercially successful album from a female hip-hop act.

Women have been part of hip-hop since its very inception. But for some reason, up to this point, they had been conspicuously absent from the world stage.

Plenty of parties in and around the New York area featured some amazing rappers. The only reason we don’t know their names and celebrate their music is that hip-hop culture had to be experienced back in those early days.

It was a community event to go to a show. People taped the shows on cassette and played those tapes until they wore out. Some of those tapes survive and I’d like to thank the people who have taken the time and effort to share them on the Internet.

We can hear theses strong female voices that never made it to a recording studio on those homemade tapes. In the last episode, I played one that feature the Inner City Disco and The Mercedes Ladies.

Of course another reason females weren’t heard in the early days of hip-hop is that rap was seen as a fad. It was expensive to get to a recording studio to produce rap music and not a lot of females had the opportunity to do so.

Fortunately, things changed in the 1980s as the records started to sell like crazy, big tours made a lot of money, and hip-hop was now seen as a hot commodity.

For a lot of people, hip-hop was associated with masculinity. However, hearing a female on the microphone never used to be unusual. The Inner City Disco and The Mercedes Ladies were accepted by their peers and could rock stages in New York without having a record out. They put on amazing shows and concerts and there didn’t seem to be a gender barrier there at all.

When hip-hop became a business, the men dominated it and it took a while for the women to break through. Fortunately, we had groups like Salt N Pepa that really cracked that wide open to show that there was an audience for female hip-hop. All of their albums were very successful, going gold, platinum, or better. This helped pave the way for what was to come.

Of course, any show focusing on the Ladies of the 80s in hip-hop would be remiss not to include MC Lyte and Queen Latifah. Unquestionably, they are two of hip-hop’s biggest and brightest stars. They will be the focus of the very next episode of Know Your History to conclude this three part series on the Women in Hip-Hop.

Remember that you can download this show for free or stream it with the player below.

Thanks for tuning in. See you soon for the nest installment of Know Your History!

Females Are Killing It

Keeping the MIX in MIXTAPES