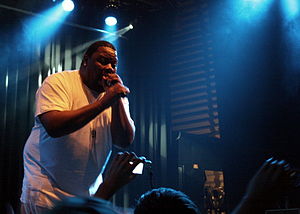 So many people outside of hip-hop culture think that rap music is just about sex, drugs, and violence. I find myself having to apologize for hip-hop a lot. I stand up and tell anyone who will listen that there is a lot more to hip-hop than you could possibly realize.

Welcome to Know Your History!

You can download this podcast for free and listen to it as you read along here.

My name is Chase March and today we will be exploring the lighter side of hip-hop, the side that doesn’t get a lot of attention and has been over-shadowed by reality rap, gangsta rap, and the keep it real mantra. Of course, we will be exploring that, and we have already explored some of it here on Know Your History.

Today I just want to have fun and explore humour in hip-hop. Now this is a huge topic and since I only have thirty minutes here with you to explore comedy rap, what I am going to do is play a handful of tracks that are humorous.

Right away I started to think of groups such as; Digital Underground, Eminem, Ludacris, D-sisive, Biz Markie, Beastie Boys, Pharcyde, Organized Rhyme, Black Sheep, DJ Jazzy Jeff and The Fresh Prince, and Run-DMC. But unfortunately, in a show like this, if I am going to talk and do any sort of history or explain what we are doing, I can only play about four songs.

So let’s have so fun this episode. Let’s play some fun songs and talk about them.

I can’t think of a better example of comedy in hip-hop than this old school classic that I’m about to play for you. This is Biz Markie “Just a Friend.” Listen to it. Let’s have some fun this episode and we’ll be right back.

That’s a classic right there. It takes us back to the 1980s when hip-hop was a little more lighter than it is nowadays. That changed in the 90s with gangsta rap and reality rap when the lyrics started to become more harsh.

When I started to do some research on this topic, I came across tons and tons of parodies. A majority of those songs were done by comedians just for the humour of it. That is not my focus today. I want to focus on the real hip-hop. I want to discuss and play artists that make hip-hop music and make records out of the love for this genre. That is what we do here on DOPEfm and especially in Know Your History. That is why I had to play Biz Markie. He is one of the pioneers of hip-hop and of beatboxing. He is an amazing artist, no doubt!

Let’s stay with the old school and play some Run-DMC right now. This song is from their amazing album “Raising Hell.” If you are a hip-hop fan and you don’t own this album, shame on you. Seriously, go pick it up. Run-DMC are one of the best groups of all-time. This isn’t one of their more famous songs but it is hilarious. It’s called “You Be Illin’”

So far, both of the songs I’ve played today have achieved their humour in one specific way. The songs tell stories that happen to be funny. They are situational comedies. Rappers can inject humour into their rhymes in a variety of different ways, however.

In rap battles, two emcees are pitted against one another. The goal is to one-up your opponent and come up with the best rhyme. The way this is usually done is by humiliating or belittling your opponent. Rappers can enter a battle with technical skill, be all serious and have amazing rhyme schemes and still lose the battle. The audience doesn’t often pick up on all that stuff. It does get the humour, however.

Humour is something we can all relate to. It’s universal. When you hear someone making fun of another person and doing so in a clever rhyme, you can’t help but laugh. That is one of the appeals of battling.

Several rappers have made their careers out of being witty. Eminem, for example, puts so much into his rhymes with punchlines, situational comedy, and sometimes he even pokes fun of himself. I think he often puts people off with his offensive lyrical content, but when you look at how he puts his words together and the beauty behind exactly what he is doing with his rhymes, you have to marvel at what he does.

Eminem is definitely one of the best emcees ever in the way he puts his words together. He is, in my humble opinion, the best wordsmith the English language has ever seen. Case if point is this early gem from his career. This song is called Brain Damage and is from the Slim Shady LP. I will probably play this song in a future episode of Know Your History when I touch upon multi-syllabic rhyming. Eminem is a master at that.

Check out this track, and we’ll be back with more comedy rap.

What Eminem can do with his syllables and how he puts his words together is simply amazing. His imagery is so clear and hilarious as well. He imitates voices in that little narrative, and he adds to the humour with carefully placed profanity. He says that he needs a “naked nurse” in a great bout of comedic timing.

Eminem is a funny, funny MC and probably doesn’t get enough credit. People can be completely off-put by his lyrical content. I know that when I first heard him I was like, “Woah, I don’t think I like this.” But you can’t argue with his brilliance. He is a gifted emcee who can tell some great stories and he does it all with style and humour.

Let’s stick with the story rhymes and play one from Black Sheep right now. This is a hilarious song that I play quite often because good music is timeless. I know I’ve been bouncing all over, playing music from different decades this show and we will continue to do so as we focus on humour in hip-hop. We’ll be right back.

That song is funny because it is true!

Have you ever been in a club with bad lighting, you meet this girl, and she turns out to be not so attractive? Or have you ever just needed excuses?

It’s hilarious to hear Dres, the rapper in that song keep throwing out excuses, “I think I lost my coat, I’m double-parked,” and he keeps coming up with them. She asks for his number anyway and he says, “It’s 765-4321” and it’s obvious that he just made it up because he is counting backwards. I like how they include a female voice in there.

Very hilarious piece, nicely rhymed, it’s got a nice beat, and we can all relate to it. Sure, it’s not that great to be running away from a girl you don’t find all that attractive, but I think we can all see the humour in that. Good job Black Sheep. The song is called “Strobelight Honey.”

I want to close off the show with Organized Rhyme. They came out about the same time as that last song did. Their entire album is comedic as well.

There are three members in the group; MC Bones, Pin the Chameleon, and DJ Signal. Pin is still involved in hip-hop and is the host of Tha New Journey of CKCU. He now goes by the name of Big Stuff. Go find that podcast if you don’t live in the Ottawa area. It is a great show. MC Bones still does comedy and you probably know him better as Tom Green.

This is “Check the O.R.” from Organized Rhyme.

Go dig through your hip-hop collection and see what you can find. We’ve only just scratched the surface here.

Remember, you can download this podcast for free or listen to it with the player below.

Five Rappers Who Will Breakout in 2017