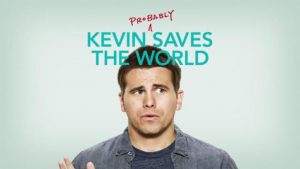 Kevin Probably Saves the World is the kind of television show that we really need more of.

It’s a unique hour-long drama that is fully of charm and humour. It has elements of fantasy and spirituality in every episode that could be a little off-putting to some people. Maybe that is the reason we won’t be getting a second season of it. However, if you get a chance to see the first (and now only) season of it, I think you will fall in love with it like I did.

It starts out with Kevin, being extremely down on his luck. After a suicide attempt, he moves back to his hometown and in with his widowed twin sister. There he meets a person that no one else can see. She claims that Kevin is one of thirty-six righteous beings and he has a duty to find the others and save the world. She is there to protect him and make sure he can complete his mission.

The interesting thing about the show is that his guardian angel had to leave heaven to help him in this mission and she can never return. As Kevin becomes a more angelic person, she starts to become more human.

Upon learning of this series, I immediately drew connections to Joan of Arcadia. Jason Ritter, who plays Kevin, was also in that series. It was about a teenage girl who was regularly visited by God and given special missions to complete. Each mission had huge impacts for both Joan and the people her deeds touched. The same thing happens with this series. And Kevin is finding redemption and becoming a better person.

The final episode actually brought tears to me eyes. I really hope this series gets a longer run than Joan of Arcadia, which only lasted two seasons. The show is amazing and I probably haven’t done it justice in this post.

I was really looking forward to a second season of Kevin Saves the World (Probably). Unfortunately, the show has not been picked up and we are left with only the first outing of a series that should have continued for a few more years. Maybe it is my fault for not posting about this sooner. If you love something, you need to support it and let people know. This is the day and age we live in. Maybe we could have saved Kevin. Maybe he could have saved television.  Maybe.