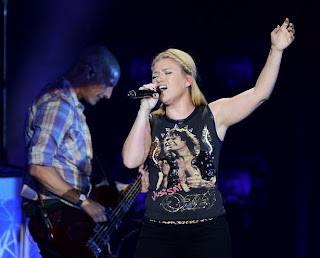 I was really enjoying the Kelly Clarkson show at the Molson Amphitheatre in Toronto last night. I had gotten a free ticket and I managed to score a pretty good seat. I was right at centre stage but I was near the back of the seating section.

I tell ya, I sure picked a good seat. The lead singer of The Fray made his way through the crowd as he sang a song and he actually walked down my very aisle. He stood on the seats and walked right behind me. It was pretty cool.

I wished I had brought my camera. I stopped bringing it to shows because I just want to enjoy the moment. Plus, in this day and age, I can usually count on someone posting good photos or videos online for me to remember the show later on. Normally I am so far back that I don’t get good shots either.

With that photo-worthy moment gone, I wasn’t sure there’d be another. But there was.

Kelly Clarkson did the exact same thing. She didn’t make her way down the row of seats I was in, but she did stop at the section just ahead of me during her cover of “We Are Young” by Fun.

I looked for myself in this clip from a fellow concert goer. I swear I was just outside of the camera’s field of vision. But I was super-close.

After she finished the cover song, she stayed in that same spot to sing “Gone.” It’s a great song and a personal favourite of mine. It was so cool to have her sing those two songs so close to where I was standing and singing along.

Overall, it was a great concert. The Fray really impressed me. They put on an amazing show. I couldn’t find any YouTube videos to show you here so you’ll just have to take me word for it. But hopefully, someone will upload one soon. Maybe you’ll be able to see when Isaac walked right passed me.

Another highlight of the concert was when he came back during Kelly Clarkson’s set to perform the Jason Aldean part of the duet with her for the song “Don’t You Wanna Stay.” That’s my favourite track by her and they did a great job of it last night.

I’m so glad I was able to score free tickets from a friend of a friend. It was a great night and a great show.

The Back to Old School Hip-Hop Show (Sept 7th)

On the Radio in the Day – Stage at Night!