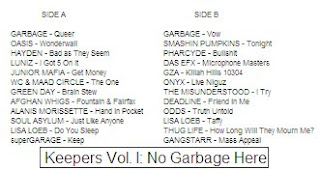 I think this was the first real mix tape that I ever made. I made it especially for a New Year’s Eve Party I was throwing in 1996. I made a few tapes so that I could just let the tape play and entertain my guest at the house party.

I don’t have a scanner so I tried taking a photo of the paper insert but it didn’t turn out. I created this tracklist using MS Paint so you get an idea of what the tape looked like.

I used to make tapes all the time but this was the first one I made using two CD players and a mixer. The songs blend into each other and there is never a fade out or a second of silence. This mix kept the party moving.

I’m listening to it right now. It’s amazing how these tapes can take you right back. I used to love making these tapes. It was almost more fun making them than it was listening to them. Now I don’t really make tapes anymore. I can quickly put a mix CD together on my computer but I can’t mix and blend the songs. It’s not the same thing.

That’s why I love my old mix tapes and still listen to them.

Anyway, here’s the track list for this tape “Keepers Vol. 1: No Garbage Here.”

Do you remember some of these songs? You might not know some of the Canadian bands on here, but these songs really rock. I wish I could transport this tape into my computer somehow so you could listen along with me. I really like this tape. And it started my collection of Keeper Tapes.

Sony HF 90 minutes cassettes were the best! Stay tuned, I might share some more of my mixtapes here in the future.

What Exactly Is Too Much Knowledge (for children)

Much 2Be Thankful For