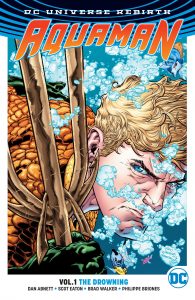 This is the start of a new era for Aquaman. He wants to work closely with the people of Earth and hopes that a new embassy will help him achieve peace between the land and the sea. Of course, there are those on both sides that don’t want to see that happen.

This was a good read, but I think with the movie version of Aquaman coming out soon will change the way people see Aquaman and a new reboot might be needed. 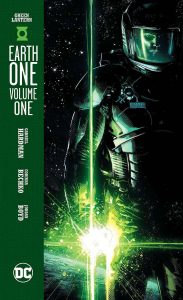 This is an alternative take on Green Lantern mythology. It is not the first time Earth One has been featured in the comics, but if you are unfamiliar with the concept this is not the Earth that we live on. Things are not ideal on the planet, which has caused Hal Jordan to work in space for Ferris Galactic.

While doing some mining of an asteriod, Jordan discovers an old spaceship that has a dead alien in it, a large disabled robot, and a power ring and lantern. He becomes the first of a new line of Green Lanterns. The corp had been forgotten about somehow but it looks like there is a new dawn.

I enjoyed this futuristic reimagining of Green Lantern’s origin and look forward to reading more. I can’t wait for Volume Two!