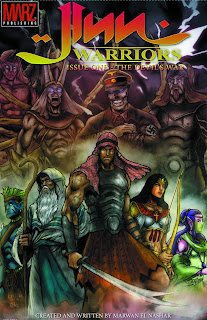 I met the author of this book at the public library and he gave me a free copy of it. It’s kind of cool connecting with self published authors.

It is set in Jannahim, the Spirit Realm that exists parallel to the Earthly Realm. There are mythical creatures in this realm as well as a few humans. The humans earned their way to the realm through selfless sacrifice. The latest human to end up in the realm by saving the life of a small child, a child who would grow up to be an important prophet.

Marwan El Nashar is telling a tale that uses historical events and characters amongst the backdrop of Islamic and Biblical faith. On the back cover he explains that the purpose is to “comprehend the nature of the devil, his minions, and plans for the demise of humanity.”

It’s an interesting tale that he has planned out over the course of eleven issues. This is the first graphic novel of the series.

In this story, we see how Adlof Hitler was influenced by the devil. We see a growing army in the spirit realm and some heroic characters including a very strong female one.

The artwork jumps off the page with precise detail and beautiful colouring and lettering. Some of the dialogue feels a little flat at times but it’s hard to write a book such as this one without getting a bit preachy or too literal at times. That being said, it’s an interesting story with a lot of potential.

You can find out more about this series at www.jinnwarriors.com