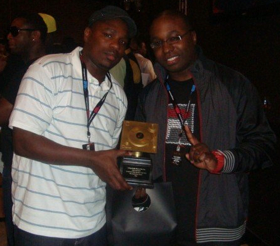 The Worldwide Wakeup Show on 89.5 CIUT won College Radio Show of the Year at the 2010 Stylus DJ Awards. The talented DJs from that show stopped by the DOPEfm booth for this interview.

You can stream it, along with all of our coverage of these Awards, at the bottom of this post. You can download the podcast for free and you can read the transcript here. Enjoy!

Chase: “Alright everybody this is Chase March and I’m here with the winners of-”

Chase: “And we got Jester and we got Chief. How’s it going guys?”

Jester: “We here. We good. Just enjoying the little run of our three-peat. We’re like the running of the bulls right now.”

Chase: “Nice. Well, while we were driving here we put on Flow 93.5 and you were spinning. You’re a regular in the Toronto scene here, heard a lot on the radio. I was doing some research before coming here though and I found out that your CIUT show, The Worldwide Wakeup Show, had just been cancelled. And you’ve been doing that for like 15 years.”

Chase: “That’s crazy! But you’re still making moves right? You’re still on Flow and we can hear you regularly.”

Chase: “So you two are a team right? How did you get together and start this?”

Jester: “Originally the show started, a while back, with my high school partner. His name was Mike and he goes by the name of Prodigy. He left and got a job at Flow and it was me alone doing Worldwide. Chief and I were friends forever.”

Chief: “We actually came from two different crews. He was playing with a crew called K.O.S. I was with Baby Blue and we just vibed from Day 1 and the whole thing came up. The slot opened and he came to me and I was like, ‘Yeah sure I’ll take it. No problem.’ We just ran with it from there and the show just grew and grew and we just kept going and it’s been going ever since, up until recent.”

Chase: “Nice! Yeah, I remember Baby Blue Soundcrew. They were a big name back in the day too. It’s really nice that they have this 2010 Stylus Awards here.”

Chase: “Yep, this is the 5th year and if I’m not mistaken, out of all the five years, you might be the most nominated person here.”

Chief: “We might have to do some research on that one.”

Chase: “So how did you get started deejaying?”

Chase: “Very, very cool! So what kind of gear do you use?”

Jester: “Serato. Every DJ uses Serato. I got the TTM 57, that’s a must, that’s the Serato mixer. Yes, it has to be Serato. Nothing less.”

Chase: “Are you active online?”

Jester: “You can find us both on Twitter. Mine is @ThisIsJester.”
Chief: “And mine is @DJChief.”

Chase: “Yeah, I really like Twitter and the immediacy of it and how you can connect with your fans. It’s really cool to be able to have that conversation up there.”

Chase: “So what can we look forward to from you in the future?”

Chase: “Sounds good. So Chief, can you remember the first record you ever bought?”

Chief: “Honestly, I don’t have a favourite mix because when I started I was mixing with tape recorders. I never even started with records. I just found anything that could play music and I was using it to mix. I didn’t really have records until later on when I actually had a job and could afford to buy records.”

Chase: “That’s pretty awesome. So you were like counting and holding the pause button.”

Chief: “Pretty much. I know you know about that. That’s exactly what it was and then you’d just wait for the song to hit that one count and you came across. That’s how it was.”

Chase: “That’s pretty cool! I love the whole ingenuity of hip-hop and were are able to do things with whatever we have. Just turning a tape deck into an instrument and making a set. That is awesome! The fact that kids these days don’t even know what tapes are is kind of sad but the fact that we have this award show brings a spotlight to that and the whole culture. It’s not just on the rappers, it’s on you guys because hip-hop started with the DJ and we need you guys. It’s awesome to be able to have this night to honour you and it’s been really cool sitting down and talking with you both.”