There is absolutely no reason for us to continue to use it in this day and age.

I don’t anyone who still has a wind-up watch. Some of us still use the traditional 12 hour clock, but that’s usually the one hanging on the wall in our kitchens, offices, or classrooms. Almost everyone had a digital watch or a phone in their pocket that displays the time digitally.

So why do we insist on calling two completely different times of the day by the exact same name?

It makes no sense!

I’ll tell you a story that happened to me this week. I stayed up till 4:00 in the morning Monday night (04:00 hrs) because my radio show had special guests in the studio and we had a great time. I love doing radio and wouldn’t trade it for anything. I knew I’d be paying the price though because I had a meeting to attend in the morning at 8:30.

So, I got about three hours of sleep. Left myself just enough time to get to where I was going. And normally that would have been fine. But it had snowed in those three hours. Completely unexpected too. It was the day before April and it had been warm the past week. I thought we were done with winter.

I sacrificed sleep, battled weather and traffic, and all for nothing! Because we can’t tell time properly in our society. It seemed natural to have a two hour meeting at 8:30 a.m. rather than 8:30 p.m. This whole misunderstanding would never have happened if they had simply told me it was at 20:30 hrs.

So, let’s still use these clocks on our walls. 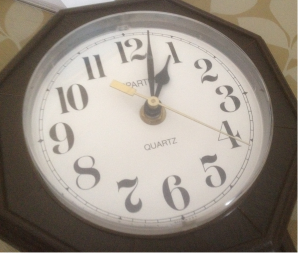 But let’s stop saying it’s 1:00 (one o’clock) and let’s start saying it 13:00 hrs. It’s the 13th hour of the day. It’s not to hard to remember the 24 clock either, especially when you can set your digital devices to read it that way for you. 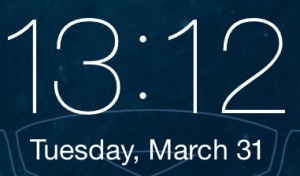 We could read the time both ways on this clock. 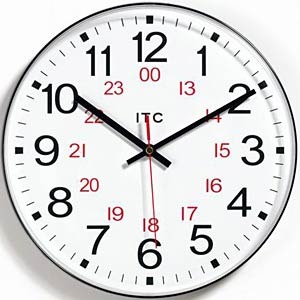 Let’s replace all analogue clocks with this face, set our digital clocks to the 24 hour mode, and start saying what the actual time is.

I don’t want this to happen again!