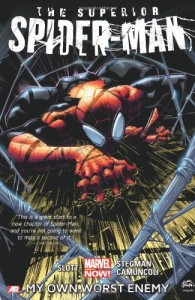 In the final issue of The Amazing Spider-Man, Doctor Octopus cheats death by body-swapping with Peter Parker. It looks like all is lost but Peter manages to get inside of Doc Ock’s brain and convinces him to continue on as a super-hero instead of a villain.

In this first graphic novel of the new comic series, we see that Peter Parker is trapped inside his own brain and Otto Octavius is in complete control of his body. The cool thing is that he has dedicated himself as The Superior Spider-Man as vows to be an even better, more efficient Spider-Man that Peter Parker ever was. 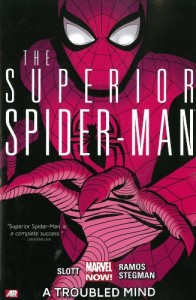 It’s amazing to see that Otto Octavius, the man who used to be the evil Doc Ock, is actually able to be the heroic Spider-Man. His methods are brutal and people question his motives, but ultimately he is still doing good deeds.

Peter Parker is still fighting to regain control of his body and to let people know that it really isn’t him behind the mask and living his day-to-day life in his civilian identity. 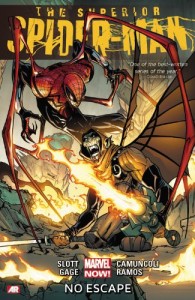 J. Jonah Jameson is now the mayor of New York City and he is overseeing the execution of the super-villain who killed his wife. When things go wrong on the island prison, he orders Spider-Man to kill the villain himself.

Spider-Man records the conversation and uses it to blackmail the mayor. He gets a secret base, a private militia, and he no longer needs to live a double life. He has even vanquished the part of Peter Parker that still managed to exert some kind of control. The Superior Spider-Man is now loose to be the hero he wants to be, even if it is a more brutal and ruthless one. 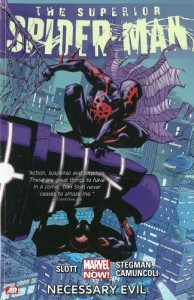 Spider-man 2099 comes back from the future in this edition and is surprised to find that this time’s Spider-man doesn’t remember him. But there are bigger things afoot that need to be addressed, mainly the end of the universe as we know it.

This series has been a great read so far. I can’t wait to read more. Doc Ock is supposedly The Superior Spider-Man but I think we would all like to see Peter Parker come back some day!

My 2014 Reading Log – sure to break a reading record this year!

Your Kid Can Be a Money Genius

The Ultimate Guide to Book Publishers by Jeff Herman