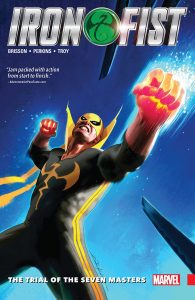 Iron Fist – The Trial of the Seven Masters

This is the first Iron Fist comic that I have ever read. It’s not the first time I’ve come across the character, however. I have read stories that featured him in several different titles, but I never really got into the character. I enjoyed the Netflix series though, so when I saw this book at the library, I figured it was worth the read.

It starts out with Danny Rand being in a rather low point in his life. He hasn’t been able to access his chi for a while but still feels the need to fight, so he goes into several underground fight clubs. He wins but still feels empty.

After one of these fights, he is approached by a fighter with skills that appear to equal his own. He gets invited to a tournament on an island he has never heard. Urgent to find himself again, and with very little options, Rand agrees and follows him to the island.

Will Rand find himself once more, or is this secret island society using him for some purpose?

This was a good read. It hasn’t sold me on the character though. I am not left eager to read more of the title. But I would like to see a second season of the Netflix show.