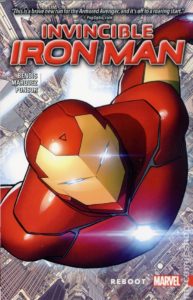 Tony Stark has new armor and it is truly remarkable. There is a stealth mode, it can change colour, and it is incredible easy to get in and out of. Unfortunately Pepper Potts is not at Stark Industries anymore and Tony doesn’t have anyone to rely on to run the business. 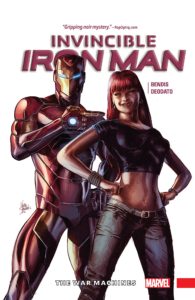 Mary Jane tried to get away from super-heroes. She moved to a city where she thought she’d just could open up a night club and live a normal live. But fate had different plans for her.  A demon invaded her venue and it took Iron Man, Doctor Strange, and Victor Von Doom to stop it. That’s right, Doctor Doom. He seems to want to help, but Tony doesn’t trust him at all.

With Mary Jane’s club destroyed, she reluctantly starts to work for Tony, and he is very lucky to have her on the team. 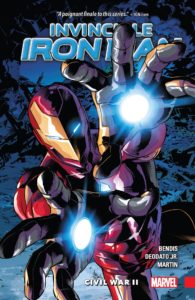 The second super-hero Civil War is a major crossover event that spans almost all of the Marvel monthly titles. The main story was quite well done, but there are pieces of the story missing if you only read that and then jump into this series.

I wish the book editor had put a few notes in this story to fill in some of the knowledge gaps I had. This volume pretty much assumes you know what is happening in the MCU (Marvel Comics Universe) and I didn’t.

That being said, having read the Civil War trade paperback and the Miles Morales Spider-man arc, I pretty much knew what was happening (for the most part).

I was really surprised to see this series come to an end as well. It will be continued in the next volume of the title and start again with Issue #1. I don’t see why either. This could have continued in an on-going series instead of a limited run volume. 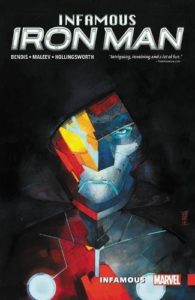 When Tony Stark went undercover and let the world believe he was dead, Victor Von Doom decided to step up and become the new Iron Man. In the three graphic novels above, we can see that he had been trying to turn over a new leaf. But it is hard to trust that he is not up to his old Dr. Doom ways.

Ben Grim aka The Thing of the now defunct Fantastic Four certainly doesn’t trust him and will do whatever it takes to bring him to justice.

I was hoping this title might have been as good as Superior Spider-man when Peter Parker’s arch enemy, Doc Ock took the mantle and was determined to be the best Spider-man yet. It’s not quite as good, but it does have some potential. I am curious to see where this title goes next.

It’s nice to see Bendis and Maleev working together again. Their iconic run on Daredevil is still one of my favourites.

Always Start With Why

One Man Can Summon the Future and Change the World