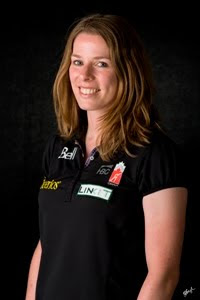 I’ve been fortunate enough to conduct a lot of interviews over the years. I’ve met and talked with some pretty famous people who I really admire. You’d think, by now, interviewing celebrities would be a piece of cake for me, wouldn’t you?

Unfortunately, that is not the case. This interview in particular was a bit difficult for me. I don’t know why, but I was completely star-struck by Christine Nesbitt.

I remember watching her gold medal performance at the 2010 Vancouver Winter Olympics. I was at home on my couch but I was catching the event live and not on a rebroadcast. The 1000-metre speed skate event was held at the Richmond Olympic Oval on February 18th at 1:00 PST and Christine Nesbitt owned the top of the podium at the end of the event.

She crossed the finish line with a time of 1:16.56. That is an amazingly fast race. Just think about it for a second – that is a whole kilometer in only a minute. Christine admits, “it’s the fastest self-propelled sport,” but apparently the ice there was not as fast as it possibly could be. “It was slow ice compared to what we’re used to skating at high altitude in Calgary,” she said.

Slow ice? I couldn’t even imagine traveling that fast under my own power, maybe in my car, but on a pair of skates, simply amazing!

Nesbitt appreciates all of the support that the country and the city of London has, and continues, to show her. “It was the energy of the crowd when we raced that was just incredible. And it was so great to do that in Canada.”

It really was inspiring to see her race and take home a gold medal. I know I was jumping and cheering at her performance and I wasn’t the only one. “We knew the whole country was cheering for us but it was nice to come home and see the montage on the streets of London when we won our medals, they went crazy, and everyone in the JLC went crazy. And it was great.”

She laughed when I told her that I went crazy from my couch as she won her event too.

Interesting fact about Christine, she plays the trumpet, although she admits that she is a bit rusty and hasn’t been practicing as much as she should. I think we can forgive her for that considering all that she has been able to accomplish. She admits a love for music, especially “jazz and rhythm and blues.”

What can we look forward to in the future from Christine? She plans to be at the next Winter Olympics. “Four more years and maybe a couple more gold medals then.”

Well, we wish her all the best. I know I’ll be cheering her on for sure. If you want to hear the entire interview, you can download it here or stream it with the player below. Thanks a lot for tuning in!

P.S. After posting this interview I learned that Christine was hit by a car while bike riding home from a workout. That is terrible news for an athlete. I wish her a speedy recovery. You can as well by going to her Twitter – http://twitter.com/cnezzy