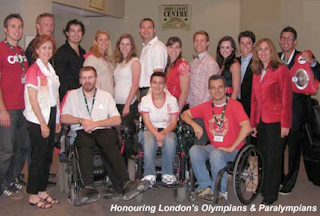 This February people all over Canada were electrified by the energy and excitement of The Vancouver 2010 Winter Olympics. It was amazing to see so many of our athletes put in stellar performances and take home some medals in the process.
London, Ontario had more than its fair share of medal winners. I especially loved seeing Christine Nesbitt take home a gold in the 1000m speed skating event. And of course, Tessa Virtue and Scott Moir were just beautiful to watch as they captured Gold in the Ice Dance event.
The city of London had hoped to welcome the athletes home with a huge celebration in February but unfortunately things couldn’t quite come together then. The athletes had commitments and continued to remain busy for weeks afterwards. However, we finally had the chance to get them all together and honour them last Monday at the John Labatt Centre.
The event also honoured our summer and paralympic athletes which was really great to see. The arena was packed full of fans sporting red and white. The crowd was energetic and loud as we honoured our local heroes.
It really was an inspiring event. I was proud to be there in the media section amongst A Channel, The London Free Press, AM 980 News, and 106.9 The X.  I felt like a little fish in a big pond and held on to my media pass with pride and excitement.
I was able to do short radio interviews with;
Joe Barker – swimmer
Joe Bartoch  – swimmer
Darda Sales – swimmer
David Duncan – ski cross
David Willsie – wheelchair rugby
Christine Nesbitt – speed skater
Tessa Virtue and Scott Moir – ice dance
Stay tuned to this blog for coverage of this event. I will have articles, podcasts, and transcripts to share with you all week long. Also be on the lookout for my articles in The Londoner Newspaper and for the interviews to air on Morning File on 93.3 CFMU in Hamilton.
Here is a closing thought from David Duncan,
“Too often we don’t stop and reflect. Myself as an athlete, this gives me time to reflect as well as what’s gone on in the past year but also the community in general. So they know the unsung heroes that are out there. They put in the work every day but don’t really get seen. These kind of celebrations are great. It showcases the people that made it to the top, but there are thousands of us in London that are trying to make it to the top. Hopefully, people will give that some thought as well and come out and support their local athletes”