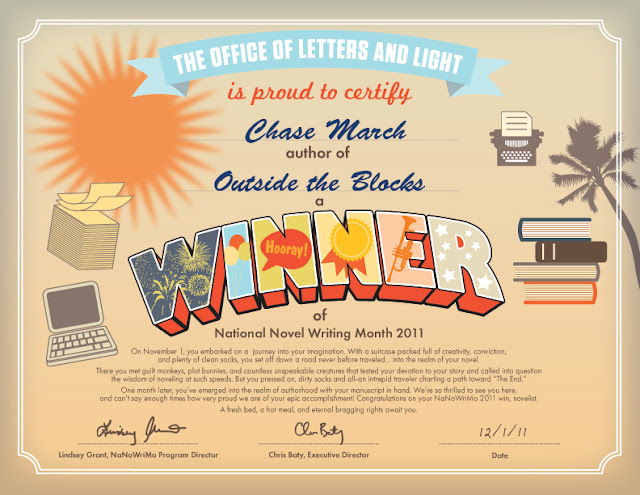 I wrote an entire 50,015 word novel in the month of November to win my very first National Novel Writing Month prize.

When I first decided to take on this challenge, I only had a rough idea of the story I wanted to tell. I wasn’t sure I should tackle it though. I’d written novels before but I’d never tried to stuff the whole creative process into one month. It sounded crazy.

But I felt like I needed the challenge. I thought that it would at least get me started on a new fiction project. I’d been working on a lot of hip-hop articles and podcasts but my fiction had taken a bit of backburner and I wanted to correct that.

I spent the last week of October trying to get my blog in order. I’d pre-written posts and scheduled them all so my blog would pretty much run on auto-pilot for the whole month. This freed me up to write, write, write.

I set a goal to write 1,700 words every day and I was able to stick to it for two weeks straight. I wrote a blog post to fill you in at that point. I had planned on writing weekly updates for you but I just couldn’t find the time.

I spent roughly three hours a day writing, every day. There were a few days in the month where I didn’t write but I managed to stay right on top of my word count goals nevertheless. Sometimes I would write during my recess or lunch breaks at school. I did most of the writing at home though.

The novel is called “Outside of the Blocks.” It’s a play on words because it’s about reclusive Lego artist, who doesn’t even realize that he is an artist. He basically plays with Lego blocks all day. His young neighbour comes across his hobby and puts some photos of his creations online and this forces him out of his self-imposed exile.

Eli Thomas keeps to himself. He stays at home most of the time and creates elaborate structures out of Lego blocks. His world is turned upside down when his nine year old neighbour discovers his art creations and helps him break out of his self-imposed isolation. But is Eli ready to get outside of the blocks? And is the world ready for a socially awkward Lego artist?

I had a lot of fun participating in NaNoWriMo and I’d like to thank everyone who cheered me on. I don’t think I could have done it without the motivation. Thanks!