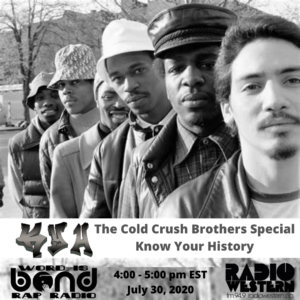 Welcome to Know Your History, your monthly dose of hip-hop knowledge. Let’s start off today’s show with a lyric from Jay-Z and then dive back in to past to look at one of the first hip-hop crews ever.

“Industry is shady, it needs to be taken over / Label owners hate me, I’m raising the status quo up / I’m overcharging n*ggas for what they did to the Cold Crush / Pay us like you owe us for all the years that you hoed us / We can talk, but money talks, so talk more bucks”

That was a short verse from “IZZO” by Jay-Z. That was a huge hit but not a lot of people understand what he was doing with that short lyric. It leaves us with a lot of questions. Who or what are the Cold Crush? What happened to them? And why does Jay-Z feel so bitter towards the entire situation?

My name is Chase March and we’ll be exploring all those questions and more as we focus the entire episode today on one of hip-hop’s first crews, The Cold Crush Brothers.

Press play to hear this episode as it was broadcast on the radio, or continue reading below.

It’s important to remember that hip-hop culture predates the rap music industry. It wasn’t a business back in the early days. Grandmaster Flash was recently on BBC Radio 1 and he explained it this way . . .

“In the mid 70s, it was a street culture for a DJ to play in a small club or in the streets, and you’d have these people called emcees—not rappers, MCs. And these qualified vocalists would play with qualified deejays. And that was the way it was for about twelve-thirteen years. Then, what happened was, a lot of these small record companies started coming in to The Bronx because their children were telling them that we had these cassette tapes of these amazing DJs who had these amazing MCs. And they came into the Bronx looking for groups that did this. And that’s where some of us had gotten the pleasure of getting recording contracts, like Afrika Bambaataa and the Soulsonic Force, Grand Master Flash and the Furious Five, The Cold Crush Crew. There were a few of us that were to the beginning of major record distribution. Now you could get these performances on vinyl. . . Now, it’s become business.”

That’s important to remember. Hip-hop had to be experienced back in the 1970s. You either went to a show or you recorded it on cassette tape. There weren’t any rap albums at the time. And when the first commercial recordings finally did start to emerge in 1979, the original street crews kept doing their thing at clubs and block parties. Here’s an example of what the Cold Crush Crew were doing back in 1981. This was recorded live from Harlem World in 1981.

That was the Cold Crush Crew performing live at Harlem World back in 1981. The entire show was recorded on cassette tape. A lot of those old school tapes have been passed around and copied over and over again. Some of those tapes don’t sound nearly as good as this one does, which is thanks to DJ Charlie Chase. He cleaned up the tape and remastered it for us old school heads who appreciate what the Cold Crush Brothers did.

The crew originally consisted of DJ Charlie Chase, DJ Tony Tone, Easy A.D., Whipper Whip, Mr. Tee, and Dot-A-Rock. Two of the members left the group to join the Fantastic Five which makes the tape you just heard even more of a battle because The Cold Crush Four were battling against two of their old members, Whipper Whip and Dot-A-Rock that night.

One of the interesting things about the Cold Crush Brothers was the way they used harmonies and traded off vocals back and forth. They had a commanding stage presence and anyone wanting to make a name for themselves tried to do so by battling the crew.

The Cold Crush expanded their original line-up to include Grandmaster Caz aka Casanova Fly, Almighty Kay Gee, and J.D.L. Money Ray. They were hugely influential in the creation of hip-hop culture and despite releasing their own records in the 1980s, fame and fortune never did seem to smile on them like it did for some of the other crews of the day. This was the first single they released. It’s called “Weekend” and it was released as a 12 inch single on Elite Records in 1982.

That’s a fun record. “Weekend” by the Cold Crush Brothers. You can hear how accessible a sound they had. It was light-hearted, it was easy to dance to, and it reflected the sound of their commanding live performances.

The Cold Crush Brothers released several other singles but none of them were able to rise to the popularity of “Rappers Delight” by the Sugar Hill Gang. That record introduced a lot of people to rap music and hip-hop culture when it was released in 1979. It wasn’t the first rap record ever released, even though a lot of people think it was. But it does have a connection to the Cold Crush Brothers. Grandmaster Flash of Grandmaster Flash and the Furious Five describes those first two hip-hop records and sets the scene in this snippet from a special he did for BBC Radio 1.

“There was a song by King Tim III. His performance was on vinyl but he was speaking in a street-tongue that a lot of people didn’t understand. It wasn’t until we heard this voice on this other record of this guy who used to be a bodyguard and bouncer at a club. His name was Big Bank Hank. We heard this record and said, ‘Oh crap, that sounds like Hank.’ So Hank, who was a bouncer, joined two other guys, Master G, and Wonder Mike. They had this record on Sugar Hill Records. I’ll never forget when I heard this song on the radio. Sugar Hill Gang, that didn’t ring a bell, at all, with any of the group masters that was doing it in the streets…Every time. I switched the dial the song was playing. It was gigantic . . . Who are these people? Never played with them, never went to any of their shows, didn’t know anything about these three guys called the Sugar Hill Gang. But they took it from the street culture and made this thing a worldwide phenomenon, which was the genius of Sylvia Robinson. That was sort of like the slow demise of street culture MCing and DJing because there was now a new prize to look at—to get that recording contract was the goal.”

It’s really interesting to know that hip-hop culture had been building in The Bronx for years and years prior to the first recordings being released commercially. It wasn’t a music business in those early days. It was a party scene, it was something you had to experience live, it was a culture.

So why was the first record ever to achieve commercial success done by someone outside of the established crews and groups? Why hadn’t Grandmaster Flash or the other crews at the time had any inkling of who the Sugar Hill Gang were?

The story starts with the Cold Crush Brothers and in particular Grand Master Caz. Caz was not only a DJ but also an MC and he was the first person in hip-hop to hold down both duties at the same time. He was well known for his rhymes and even if you had no idea who the Cold Crush Brothers were prior to hearing this show today, I bet you can recite some of his lyrics right now.

In a bizarre twist of fate, it was his manager and bodyguard Big Hank who brought these lyrics to a much wider audience. He was working at a pizzeria and was rapping some of the great rhymes that Grand Master Caz had penned. Sylvia Robinson overheard him rapping along to one of Caz’s practice tapes and she liked what she heard. She recruited him to join two other rappers and form the Sugar Hill Gang in 1979. Hank asked Grandmaster Caz if he could use some of his rhymes for the record he had been asked to record. They were friends so Caz agreed. He thought it would be a way for him to become known and perhaps make a name for himself in the new recording industry that was starting to build. Grandmaster Caz tells the story in the Quincy Jones’ program BEEF II.

So in the end, Hank used Grandmaster Caz’s rhymes in the recording. He just straight lifted the rhymes without changing a single thing. He even spells his name in the course of the rhyme as “Casonova Fly,” which of course was Caz’s nickname. There really is no dispute over who’s rhymes those were. The only problem was that Grandmaster Caz was never compensated for his work. It was the biggest hip-hop record at the time and still gets plenty of spins. He never received any royalty payments, no writing credit, and only the most educated hip-hop heads know the true story. Grandmaster Caz tried to get his story out there with the Beef DVD and with this track, “MC Delight.”

The music industry can be shady. A lot of hip-hop’s pioneers have been ripped off. They haven’t gotten the credit they deserve or the money that they actually helped generate for hip-hop labels and executives.

That is what Jay-Z was talking about on his hit IZZO. He raps, “Industry is shady, it needs to be taken over / Label owners hate me, I’m raising the status quo up / I’m overcharging niggas for what they did to the Cold Crush / Pay us like you owe us for all the years that you hoed us / We can talk, but money talks, so talk more bucks”

With that lyric, Jay-Z was helping to call attention to the fact that many of our pioneers had been exploited just in the nature of the music business. Of course, rap music didn’t start out a business. And those early pioneers had no idea how much money was to be had. The Cold Crush Brothers weren’t the only crew to be shorted. It just is a shame to see that these pioneers of the art form never did get compensated financially for what they helped develop.

When I was doing my research for this show, I found out that a lot of people don’t have any idea who the Cold Crush Brothers were. I found a few discussion boards about that Jay-Z lyric and it was sad to see that hardly anyone had done their homework to find out what that line meant.

It’s important for us to remember where we came from, to honour our pioneers, to share the rich history we have in hip-hop culture. That is what I try to do every single day. I’m a hip-hop historian and I’m glad to have this outlet to share some of these stories with you. You’ve been listening to Know Your History on DOPEfm radio and The Word is Bond.com. I’m your host Chase March and I bring this segment to you each and every month. You can check out my site for transcripts and free downloads of every episode at chasemarch.com.

This is the third season of the show and so far we have over two-dozen episodes in the archive. I hope you subscribe to the new Word is Bond podcast and the long established DOPEfm podcast as well. We continue to bring you the best in underground hip-hop each and every week on the radio and every day on the world-wide-web.

Thanks for tuning in, this is Chase March and you better Know Your History!