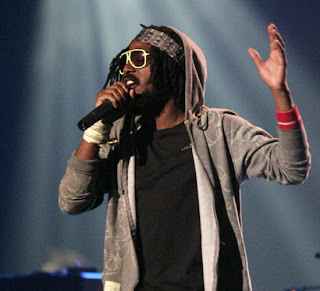 K-os was the headliner of the concert. He is an amazingly talented singer, songwriter, rapper, and musician. I was very excited to finally get a chance to see him in concert.

The best hip-hop shows, in my humble opinion, include a DJ who can cut and scratch. K-os went a step further by not only having a dope DJ backing him up, but a live band as well. They sounded great together.

K-os announced to the crowd that his throat was killing him and that he had almost cancelled the show. “But that’s not rock and roll,” he exclaimed and then went directly into one of his songs.

A few songs later, he mentioned that his dad was in the audience, and that was another reason he didn’t want to cancel the show.

His management had already told us that he was under the weather and that we would not be able to interview him on site for the radio show. Seeing him on stage definitely confirmed that. He looked tired, but in true rock star fashion, he didn’t let that stop him from delivering an incredible set of music.

One of his biggest hits is “Crabbuckit” and the audience went wild when he started to perform it. As determined as K-os was to rock the crowd, his throat decided it was time to shut down. K-os started the song but had to stop. He motioned to the crowd and the kids in front of the stage dutifully took over and recited the lyrics.

You could tell that K-os was not pleased that his voice had given out. I know that he takes his music very seriously and was probably certain that he could manage this show, but it turned out to be too much for him.

He continued with the chorus and did the third verse of the song. He put the microphone back on the stand, said, “Peace” and left the stage. The band followed him after they finished playing the end of the song.

The crowd wasn’t pleased with the short set. I think it was roughly half an hour. But I understood that the show was over. I appreciated that K-os tried his best to deliver and that he simply needed to call it a night at that point.

I was hoping to hear some of his old-school joints. I really wanted to hear, “Rise Like the Sun.” I also wanted to hear “I Wish I Knew Natalie Portman” , “Man I Used to Be” , and his verse from the Rascalz’ “Top of the World.” Unfortunately, that was not to be the case and I had to accept that.

So, hip-hop night was ill – literally. Both he and his opening act seemed to be suffering from a summer cold or something like it. I got to give them both credit though, they soldiered on.

Hopefully we will be able to link up with K-os soon for one of our in-depth interviews we always deliver on DOPEfm.

I am a huge fan of what K-os has been able to accomplish since first hitting the scene way back in 1993. He was definitely ahead of his time back then and you can hear it in those early tracks. So let’s close off this post with his debut music video, “Musical Essence.”

Could’ve Been my Wedding Song (Day 23)

Why Are You Learning?

Keep Your Resolution by Not Breaking The Chain