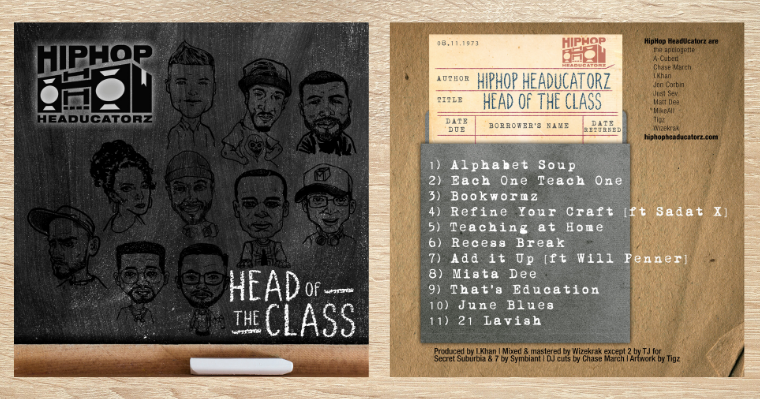 “Head of the Class” is available wherever you listen to music. You can even watch the album as we created a visual version of it for YouTube.

This is more than a collection of music. It is a way to connect with students and fellow teachers. We will be releasing a teacher resource book to accompany it in just a few days. This deluxe version will come with an 80 page book and all of the instrumentals and will be available on Bandcamp.

Our crew is comprised of DJs, producers, emcees, breakers, and graffiti artists. We are all active teachers who embrace Hip Hop culture both in and out of the classroom. As professional educators, we know how it can reach and inspire our students.

All of the tracks on this project are clean and appropriate for play on the radio or in your classroom.

Click on the links above or search for it on your favourite platform.

More Than a Rap Group

Hip Hop HeadUcatorz are more than just a rap group. The crew is comprised of DJs, producers, emcees, breakers, and graffiti artists. They are all active teachers who embrace Hip Hop culture both in and out of the classroom. As professional educators, they know how it can reach and inspire students.

“Head of the Class” is more than a collection of music. It is a way to connect with students and fellow teachers. The deluxe version of the album comes with lesson plans and resources that can be used in the classroom (download it from Bandcamp).

All of the tracks are clean and appropriate for play on the radio or in your classroom.

A teacher with the TDSB since 2014, he has loved hip hop all his life. He appreciates the art form and strives to communicate clear messages of positivity!

His work is based on valuing the culture, perspective and potential of the youth.

A hip hop artist, spoken word poet, speaker, band leader, writer and DJ based in Milton, Ontario. Jon blesses stages with a dynamic show that stays true to the basic tenets of hip hop: peace, love, unity and having fun!

A teacher with TCDSB since 2013. Outside the classroom, Sev applies his passion for teaching as a minor league hockey coach.

He brings the floor work and dance moves and always busts a move.

A Scarborough, Ontario native and TCDSB educator. His goal is to put the poet back into Rhythm And Poetry.

the apologette is a seasoned high school teacher, mother, spoken word artist and emcee whose life experience and passion for performance pours out on the mic. She hopes to raise awareness of gender based and domestic violence, anti-racism and equity for all by using her voice through poetry, social media and in the classroom.

Millionaire, genius, inventor…Tigz is none of these things. Instead, Tigz (who provided cover art and raps) is a humble story-maker from Jane and Finch who likes doodling on walls and eating hamburgers.

Also known as MC Skeletor and DJ Andy Gee, he is an emcee with grey hair for whom MC means Midlife Crisis. During recess, he runs the “Live Poets’ Society” where students write rhymes, produce beats and mix tracks.

The Key to Good Production