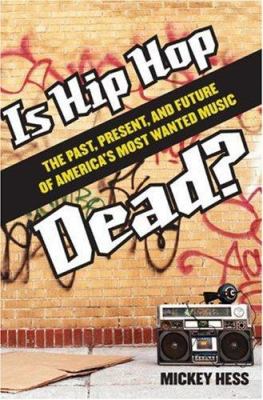 Is Hip-Hop Dead? by Mickey Hess

This was an interesting read and I learned a few things including . . .

Why rappers have such strange names?

“Hip-hop naming grows out of larger traditions. The choosing of rap names reflects the on-air names of 1950s disc jockeys, the 1960s move for black athletes and entertainers to reject slave names, and the renaming of public figures lie Muhammad Ali and Kareem Abdul Jabbar, who took Islamic names upon their conversion to Islam.”

Hess also covers come topics near and dear to hip-hop heads like myself. Here are some of the notes I took as I read the book.

Is Sampling an Art or Just Stealing?

“In sampling, a DJ’s credibility is built from discovering unused material, and to reveal sources is to give away the secrets of the trade.”

“Sampling, at its best, uses sources to create new meaning.”

“I believe that to equate sampling to plagiarism ignores the ways that sampling transforms and responds to the source it uses.”

“Sampling transforms sources by placing them in the new context of hip hop  lyrics and other samples. Rather than copying the original source, hip-hop producers critique and respond to the original through juxtaposition, parody, and direct commentary.”

“In the overarching social structure of the United States, white people are born with social advantage. The question, then, becomes one of how white Americans treat this advantage when they record hip hop music, where artists draw credibility from social disadvantage. In the early 1990s hip hop, Vanilla Ice tried to conceal his white privilege  and YBT claimed a cultural blackness that set them at a disadvantage among whites. Since the late 1990s, subsequent white artists have confronted and redefined their whiteness in different ways.”

“Eminem inverts the narratives of black artists to show whiteness hindering his acceptance as a rapper. At the same time, he addresses the marketability of his whiteness as a privilege he would not have if he were black.”

Nas declared hip-hop as dead several years ago with his controversial song. Mickey Hess is playing with that in the title of the book. I don’t think either of these gentlemen think that hip-hop is truly dead. It is just in a different place than we all wanted it to be at this point. But the underground is still producing the kind of music we love. I don’t think hip-hop can ever die. Those of us that are part of the culture will keep it alive. I know I will.