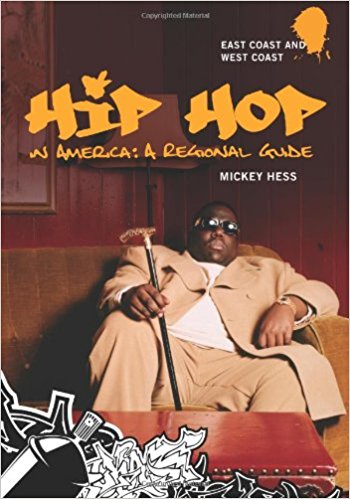 Place is an important aspect when it comes to music. Nashville is known as the home to country music and is celebrated by many singers. New Orleans is held in high esteem when it comes to jazz. Many artists strive to put their city on the map. And it gets even more specific in hip-hop music and culture. Neighbourhoods are celebrated. This series of books does its best to highlight those scenes and the artists that helped popularize them.

Hess talks about something that I have rarely though much about – the immigration of artists to specific areas. For example, Gangstarr is one of New York’s most celebrated groups, however, Guru hails from Boston and DJ Premier is from Houston.

Here are some further examples; Kanye West was born in Atlanta but clearly reps Chicago, Eminem was born in Missouri bu he carries Detroit, Shock G spent his early years in New York but claims the Bay Area, 2Pac was born in New York, raised in Baltimore, and repped West Coast till he died, Too Short moved to Altanta, then back to the Bay area, MF Doom was born in Great Britain not Long Island, Monie Love moved from the UK to Philly, Ice-T grew up in New Jersey before moving to LA, and Krs-One reps hard for the Bronx but was actually born in Brooklyn.

The history covered in this book is impressive. I highly recommend it for any hip-hop fan. 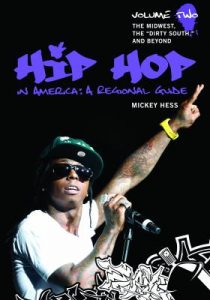 The second volume in this series deals with the other areas of the United States of America. It covers some of the first radio DJs and how the scene started in Chicago.

Hess writes about one of the earliest hip hop DJs in Chicago . . .

“Dr. Jokenstein, a rhyming radio DJ. Roderick G. “Rod” King was given the name Dr. Jokenstein by George Clinton of Parliament-Funkadelic. Thousands of listeners would tune in to hear “Dr. Jockenstein, operating on your mind” on his Roll Call show. He emphasized how everyone would want to call in an partake in this form of call-and-response. Jockenstein recalled, “I had letters from Southwestern Bell to change the time I was doing the Roll Call show because I was tying up their switchboard.

Every day there was a formal routine that hypnotized the youth of St. Louis: Dr Jokenstein would say, “Here we go on the ra-di-o, I’m the DJ Jock in ster-e-o. We’re gonna have a good time. On the Roll Call line.” Then Jockenstein would ask his callers: “Hey, what’s your name? What’s your sign? Give me that No. 1 school. Your favourite teacher with the golden rule. Your favourite station in the nation. From there the show turned in to much more. Soon enough, people were calling in Monday through Friday who had made up their own rhymes and transformed the show into a place for freestyle.

Many of the early rap groups from St. Louis were first heard on the program: Kid Robb, Kid Smooth, King Odie and the Golden Boys, for example. Jockenstein is remembered as the man who introduced the city of St. Louis to rap music and is often compared to New York’s Mr. Magic.”

I also like the section about the importance of football and the role marching bands played in developing the musical stylings of Pharrel Williams and even Missy Elliot.

These two books were a great read for anyone interested in hip-hop music and culture.

Teachers Need to Lead By Example