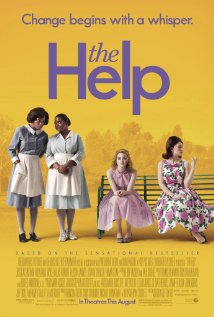 The Help is an incredible film. It’s based upon the novel by Kathryn Stockett. I’ve heard good things about the book but I have so much on my plate right now that I knew I probably wouldn’t get around to reading it. That’s why I watched the film last night, and I am so glad I did.

There are very few films that resonate with me and leave me saying, “Wow, that was amazing!” This film did just that.

It’s set in Jackson, Mississippi in the 1960s amidst the beginnings of the Civil Rights Era. And although it is a period piece, it was almost like I was watching a science fiction film. I couldn’t believe the size of the houses that these small white families lived in back then. I couldn’t imagine myself living in such a large place and employing maids and nannies to keep my house tidy and raise my children. I couldn’t imagine inviting people into my house who I had no respect for and then treating them horribly as they did all the thankless tasks that needed to be done. But that is exactly how these black women were treated by their white employers.

I knew racism was huge back then, especially in the south. And I have heard about the separate drinking fountains for blacks and whites but I was shocked to see that the black help were not even allowed to use the washroom in the houses that they worked in.

One of the characters in the film, went so far as to draft a law that required a separate washroom to be built solely for the use of “the help.” It seems that most of the characters are silently complacent in the racist practices of the day. Fortunately, not all of them act in such outrageous ways.

Skeeter, played by Emma Stone, returns how from college and is shocked to see that the woman that her family had employed for her entire life had been fired. When she tells her mother, “She raised me!” we can see the hurt in her mother’s eye. It’s as if she didn’t even know that “the help” had fulfilled her motherly duties and was loved by her own daughter for it.

Skeeter wants to be a writer and she has the brilliant idea to let “the help” finally speak for themselves. She wants to interview them for a book but is met with a lot of resistance. The white women who employ black maids and nannies don’t like the fact that Skeeter is being so friendly towards them. They don’t like her talking to them at all. The black women are also scared that they will be fired if anyone finds out (or even worse that they’ll be beaten or murdered.) It’s a scary time but Skeeter manages to compile some amazing and heartbreaking stories from “the help.”

This film, along with some of the things I’ve been reading lately have really opened my eyes to the racism that still exists today. I’d thought we’d come so far since the 1960s. I can’t believe how much of this stuff still goes on.

The tag line to the film says, “Change begins with a whisper.”

We need more change though. Racism is still here, and I hope this film and this book spark some real discussion about these issues. After watching the film, I really want to read the book. I’m added it to my “to read” pile.

Band to Listen to When You’re Angry (Day 20)

Jux Cain kicking it on Word is Bond

My Logo is Everywhere