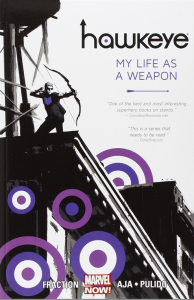 Hawkeye: Volume 1 – My Life as a Weapon

When I first heard of this title, I really had no interest in reading it. After all, he is probably the least exciting member of The Avengers. But the praise for the book has been strong, so when I saw it on the shelves of the public library, I had to pick it up.

I must say that I really enjoyed this one a lot. The humour in it is priceless. It’s along the lines of what was done in The Avenger films as well. I knew I had to read the entire series. 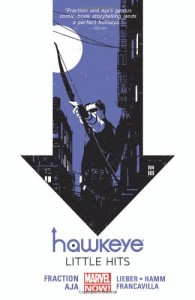 I love how this volume starts much like the last one. Hawkeye is in an impossible situation and wondering how he gets in these predicaments. There are some stand-alone stories in this collection including a great one about his dog. T 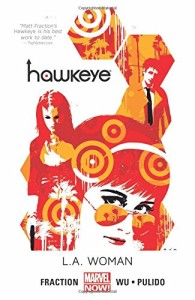 This volume focuses on Kate Bishop, the other Hawkeye. She breaks it off with Clint and heads to L.A. where she quickly finds herself in the kind of predicaments he usually finds himself in. 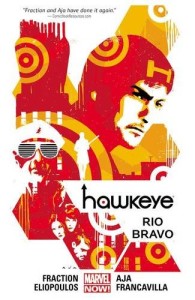 Clint’s brother enters the picture and they fight like brothers do, or maybe worse. This volume concludes the epic first run of the series. I was sad to see it end. It was a great story from a great creative team. I highly recommend it. 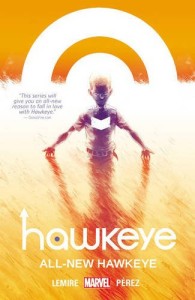 This graphic novel takes Hawkeye in a different direction than the last series. It is a new creative team collecting All New Hawkeye 1- 5. It has flashback scenes that show Hawkeye as a kid and how his brother used to take care of him. 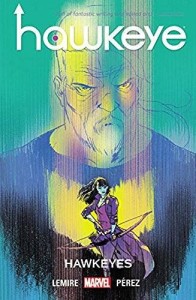 The flash forward scenes in this one quite comical. And like Old Man Logan, it’s nice to see older adults in comic book adventures. That’s not something that is seen very often. I should know, I just did a report on it for school. I think I will post my slides here later. Stay tuned!