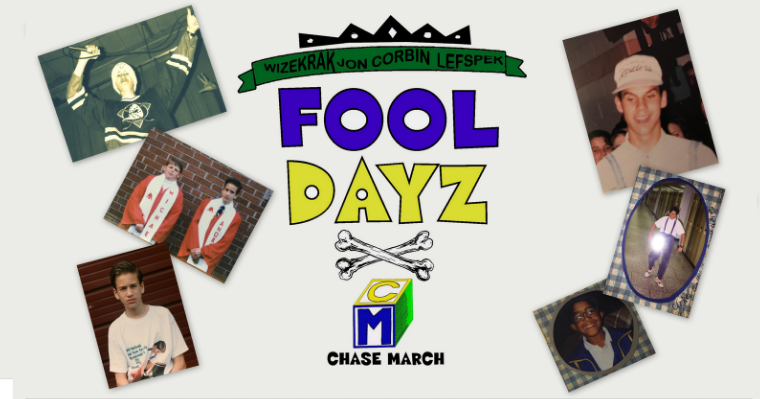 This song is special as it showcases Wizekrak on production. The guest feature from Lefspek also marks our first time collaborating with an MC outside of the educational realm.

The playful song contains verses by Wizekrak and Jon Corbin and DJ cuts by Chase March. It explores different student personalities such as scholars, pranksters and class clowns. Overall, it highlights the hilarious hijinks that can arise in the classroom.

This is a bonus track that we wanted to release on April Fools’ Day. It will be part of the deluxe version of our debut album that will come with an 80-page teacher resource chopped full of lesson plans, worksheets, and blackline masters.

This single also includes a sample lesson and worksheet based around our song “Alphabet Soup,” which is also available as a free download.

The Deluxe Version of “Head of the Class” drops next week on Friday April 8th.

Stream or download the song and teacher resource for free

or use the player below!

Well there he goes again the bro who’s making jokes again
I be rolling eyes because he’s breaking up the flow again
(The) Teacher wants to teach the class, I just want to do some math!
Read another word or two
He’s missing all the verbal cues!
Bro, this is hurting you
Say it and you’ll hurt me too
When your classified a nerd people get personal
But I’m so versatile!
And we’re all worthy, dude
Come join the learning crew!
This is what learners do (for real)
I’m not sure if I’d want to trade places
But no one looks to me for any great statement
It’s hard to believe I’ll be any great shakes when
I’m picking at my teeth with my metal grade braces
I’d like to say I’m funny without doubt but
They can’t tell when I only keep my mouth shut
Quiet as a mouse, so maybe they’ll never know
I guess there’s ways we both gotta grow

Now in my younger days
We’re never short of laughs
When I went to school
Abunch of clowns in my class
Extra fun when you’re young
And it’s not something you’re spose to do
Tryna keep quiet but Our Riot’s bustin’ through
Pass a note with jokes
And catch you chokin’ on what’s wrote
Wet willie, wedgie, thrown eraser to the throat
Elastic slaps to the back
Fake farts at morning snack
Days were never boring
But someone’s snoring like a yack
Everybody got quiet when the teacher got intense
Didn’t want to get detention or spend recess at the fence
Really tried to learn and not get Fs on my report card
But Jokin’ with these jokers y’know it made it so hard
To stay out of trouble and not get distracted
It still makes me double when I think of how we acted
Remebering that place as Chase cuts up the Urkle
Has me reminissin’ bout my last purple nurple

Know Your History: A Spotlight on Queen Latifah