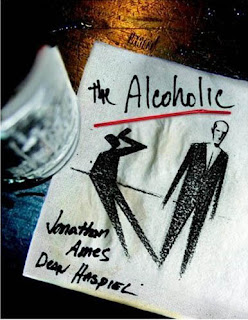 I picked up this book from the public library and I don’t even know why. It didn’t look like something I really wanted to read.
It’s a graphic novel by Jonathan Ames and Dean Haspiel called “The Alcoholic”
I almost put it back on the shelf. I didn’t want to see the main character battling his demons. I stay from alcohol because I have seen what it can do to certain people. It’s pretty sad when someone’s life becomes all about drinking and doing drugs.
Yet, something about the story kept me reading. I actually had a hard time putting down the book once I started it. (Spoiler Alert)
When I got to the love story between Jonathan and his first true love, it really spoke to my current situation. I could see how much he loved her and how it destroyed him when she left. They both kind of stayed in touch with each other, but this just tormented him as he kept thinking things would work out between them. He constantly dreamed about them getting back together and he kept staring at his phone, willing it to ring. He kept daydreaming that he’d bump into her outside somewhere. It was really sad to see his heartbreak and how she became a new obsession to him.
Over the course of the story, Jonathan comes to realize that he stopped loving her years ago but for some reason, he had kept the dream of them being together. It was more about what he wanted and not about love.
I think I read somewhere that when you love someone, it often has a lot more to say about you than the object of your affection. You choose to love this person because you can see a future that you want to have with her.
I don’t know what I’m saying. I think in a lot of ways, I am as lost as the main character here. He can’t figure out how he could have such a strong connection with someone, only to see her leave him. He wants to hold out hope that they will find each other again and that he wasn’t wrong. She had to be “the one.” She had to be.
Love sure is confusing.
I like how Jonathan comes to a realization at the end of the book. He figures out that we can’t always have what we want in life. He’s determined to move on, to leave her and the alcohol in the past. He yells his promise to do so in the street so all can hear him. It’s a new beginning and full of promise. And then, he walks passed a bar and pauses. The end.
There is a lot of praise for this book floating around and some of it is featured on the back and inside covers. Neil Gaiman writes that he listened to Jonathan Ames tell “a roomful of people a story from his life: funny and heartbreaking and much too personal for comfort. The Alcoholic is the comics equivalent of that: the kind of odd, readable, painfully-honest-even-if-we-don’t-know-where-all-the-fictional-joins-are… I don’t know how much Jonathan A is Jonathan Ames. I’m not sure I want to. But I am glad I read The Alcoholic.”
I agree with Gaiman. I’m glad I read it too. That’s why I need to add it to my Recommended Reads list, but with a bit of a warning though. It is hard to read and deals with some pretty heavy content but it’s a powerful story that is well-told and will keep you thinking about it even after you’ve come to the end.
Gritty Graphic Novel