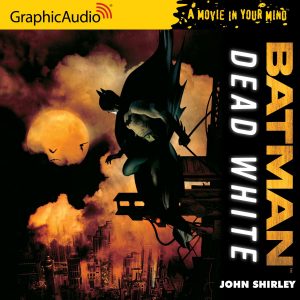 This was a dark story, certainly not meant for children. There are several racial slurs heard throughout the book but that is because the evil forces in this story are a band of white supremacists who are determined to reshape the world. Batman has to track down the leader, known as White Eyes but he doesn’t do it alone this time. He gets help from a police officer / bounty hunter.

This story takes place in the first year of Batman’s crime fighting career. He struggles a bit with his role as protector of Gotham. He is haunted by images of the very first costume he wore when he became the Batman. An old lover tries to help him but he keeps his secret from her.

There are times when these audio adventures are a bit over the top. But the full cast narration, sound effects, and general comic book aesthetic are a fun ride.

Earlier this year, I listened to the Flash adventure Stop Motion and the Wonder Woman story Mythos which prepared me for the whole team to come other in the Justice League. 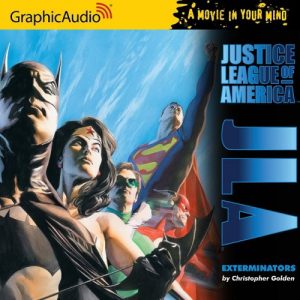 Several new meta-humans start to appear in one region of the world. Then these super-powered people start to disappear. Could it be related to a threat that the Justice League fought and defeated ten years earlier?  Aquaman and the Martian Manhunter have a nagging suspicion that it is. Batman confirms it and the Justice League goes into action, this time with a new meta-human who might just hold the key to exactly what is going on.

Like the book above, this one has it’s problems. Mostly it is due to exposition. Certain things don’t need to be explained to a comic book audience. However, these stories are meant to stand alone and be accessible to anyone. They are a lot of fun and the audio format make them perfect listening for long drives in the car.

Alternatively, there are print editions of these novels available if you would rather read them with your eyes as opposed to your ears.

5 Storytelling Secrets from the Masters of Radio