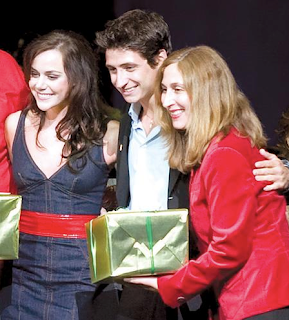 This February the city of London was electrified by the performance of some of our own at the Vancouver 2010 Winter Olympics. It was incredible to see how London athletes represented the country and we all looked forward to a huge welcome home ceremony to celebrate their achievements. That ceremony finally took place last Monday as the JLC played host to Inspiring a Dream: London’s Community Olympic Celebration. A large and energetic crowd packed the arena to celebrate and honour our hometown Olympic athletes.

Gold medal winners Tessa Virtue and Scott Moir received deafening applause and a standing ovation when they were introduced to the crowd. The ice dancing pair dazzled people all over the world with their amazing performance at the Vancouver Olympics. They were the first Canadian team to ever win gold in ice dancing. Not only that, they were the first North American team and the youngest ice dance team ever to claim that honour in the event.

Scott Moir was overwhelmed by all of the support his hometown has shown the pair. Before the JLC event, Ilderton threw them a celebration. “The whole town of Ilderton came out, which is a population of 1200 people. We had about four thousand people out for the parade and the celebrations. So it was overwhelming and a lot of fun.” On Monday the response at the JLC was equally impressive. The crowd was a sea of patriotic red and white as they gave the pair a standing ovation.

The Ilderton Skating Club paid Virtue and Moir tribute on the ice as well. It was touching to see Scott and Tessa’s reactions to the performance. When asked about it, Scott said, “They know us best. That’s where we got our start. My aunt Carol put us together.” They were paired when Tessa was only seven years old and Scott was nine; they’ve skated together even since. Carol Moir is still involved in the local club and she brought back a few of Virtue and Moir’s old routines.

Tessa thought it was unique to see the club skating to the songs that she and Scott had done when they first started skating together. “That was really special to see. They put on a great show and we were laughing the entire time.” It wasn’t just the music that was the same however, “even some moves,” said Tessa. “Some lifts were the same. It was great. They did an amazing job!”

As I was interviewing the pair, a fan interjected and told them that they were a handsome couple. Scott quickly added “just on the ice though.” It seems that a lot of people ask them if they are dating. According to Tessa, “That’s probably the number one question we receive.” She takes that question as compliment “because it means what we’re doing on the ice is believable. We always try and be sincere and genuine in our expression. Just like any movie you watch, you want the actors to be together. So we understand that. It’s a compliment.”

They obviously have so much chemistry that it’s natural for fans to want to see them together. Scott admitted that they are best friends. “We work together eight hours a day, eight days a week. That’s how many days we work together.”

The pair were the last people to leave the JLC after the event. They stayed and talked to every fan and signed hundreds of autographs. Virtue and Moir felt it was important for them to do so. Tessa confessed that the support helped her during the Olympics last February. “The support we received starting with the community was unbelievable and it allowed us to do our job. We stepped on the ice totally focused, completely prepared, and able to skate with our hearts and we’re so grateful for that opportunity.”

It was just announced that London will be hosting the 2013 World Figure Skating Championships. Part of the reason the city landed the event was due to the attention figure skating has lately received because of our local heroes. They are certainly captivating to watch on the ice. However, Scott and Tessa wouldn’t take any credit for London receiving the event. Instead, they proclaimed the JLC as a perfect venue for the event and they are proud and excited that the event will be held here. “It’s a fantastic skating town and whatever capacity we’re in, we’ll be here rooting the skaters on. That’s for sure,” said Tessa.

Tessa Virtue and Scott Moir are already back on the ice. They are currently in Michigan and working on two new programs for next season. Tessa lets us know that London will always be home though. “I can guarantee you that every chance we get, we’re racing back to London. This is home.”

You can download the interview I did with Scott and Tessa for free, or stream it with the player below. You can also see how it looks in print. That’s right, this article also appeared in the newspaper.