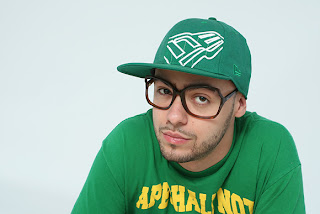 Chase: ‘We’re back with Ghettosocks. Just chilling on the patio here at Hess Village before he takes to the stage.

If you missed Part 1 of this interview, you can go back and read it now, you can download the entire show for free, or stream it with the player below.

Besides Ghettosocks, we also have Muneshine and DJ Irate in the house.

Much Music has been pretty kind to you, Ghettosocks. You’ve had quite a few music videos on regular rotation, haven’t you?”

Ghettosocks: “’Don’t Turn Around’ , ‘Out for Treats’ , “Step to a T-Rex,’ my first video, “Stolen Kicks’ with Pumpkinhead from Brooklyn Academy is my latest one.”

Chase: “Have you been on the new incarnation of Rap City?” Ghettosocks: “I don’t know. Funny you should ask that. I have been on the show. Maestro Fresh Wes invited me on during the Juno episode. I came and sat on the couch and hung with Maestro. I didn’t say anything. I wasn’t spoken to. But I chilled on Rap City. I was on TV hanging out.”

Muneshine: “That’s what I did too.”

Chase: “It’s really good to see that Much Music has brought Rap City back as a show. It’s been stagnant for years and they just played videos. They didn’t have a host or commentary or anything. I think that it’s important that we have these kind of outlets for hip-hop instead of just commercial radio, which a lot of it is just garbage, in my humble opinion. You need to dig a little bit deeper and listen to Muneshine. Listen to Ghettosocks. Listen to some quality hip-hop instead of the garbage kind of stuff tha’s on the radio.”

Ghettosocks: “Agreed.” Muneshine: “But the problem is, it seems like Rap City isn’t really going beyond what is on commercial radio, at least what I have seen of it. It seems like they are still going with the same people. I don’t think they’re utilizing that avenue that they have to showcase new artists. I don’t think that’s really happening. They’re still playing it safe with people who are already out there and you already know about.”

Chase: “Yeah, and that’s a shame because then it comes down to us in community radio. That’s why I love campus radio. We have a lot of shows here, not just ours, and some of them play a different range of stuff like the more jiggy or commercial stuff, but there’s a lot of support for underground artists in community radio. Do you find that as well?”

Ghettosocks: “Definitely. I’ve gotten a lot of support from campus radio across Canada. I’ve charted really well. Every single one of my releases have made it to Number 1 at some point. I’ve held it down for weeks and weeks. So, yeah, it’s very important. If it wasn’t for guys like you coming through and playing it on your shows and letting people know what time it is, then a lot of people wouldn’t know about it. You guys play a very important role.”

Chase: “One DJ that’s really got your back is DJ Premier.”

Chase: “DJ Premier has played you a couple times on his show.”

Ghettosocks: “That’s a connect I got through Muneshine. Big ups to Muneshine, the man sitting next to me. He hooked that up.” Muneshine: “That’s what friends are for.”

Chase; “When you look at your discography and the tunes you have put out, you’ve worked with tons of people, like anybody who is anybody in hip-hop. It’s pretty impressive. Is there anybody that you’ve been dying to work with?”

Chase: “It’s interesting to see that you’ve got your solo career but then you keep doing these extra bands.”

Chase: “You’ve got one with Muneshine called ‘Twin Peaks’ and according to your bio, you’ve got one coming up with D-sisive as well. You’ve got a couple other ones And Teenburger?”

Ghettosocks: “Shout out to Jorun Bombay, again. Shout out to Timbuktu. We actually just finished the Teenburger album and are about to do some shows on the East Coast, and some in Quebec and Ontario. ‘Burger Time’ is the name of the album. But there is a lot of crews; Wolves with D-sisive, Muneshine, and Bix. It’s just different combinations, all under the Dropping Science umbrella. That’s our label. It’s more like an orphanage where dope artists go and we can get our music out.”

Chase: “The album is called ‘Burger Time.’ That reminds me of that old-school video game. You ever play that game?”

Gamma Krush: “You had the salt to stop the hot dog from chasing you or something?”

Chase: “Yeah, a hot dog was chasing you around and you had to wlak over the bun and the toppings and they’d fall down as you built the burger.”

Chase: “It doesn’t compare with the new school games, does it?”

Ghettosocks: “It’s better. There is no comparison. It’s way better.”

Ghettosocks: “Yeah, man. I like games. I have an arcade game in the middle of my living room that I never use. That’s how into games I am.”

Muneshine: “Except when you do to Timbuktu’s.”

Ghettosocks: “The game that I play all the time when I’m at Timbuktu’s is ‘Super Ghouls and Ghosts’ from Super NES. It’s a really unique game. It has easy, medium, hard, expert, and professional as a difficulty setting. So when you beat the game on professional, you have to beat the whole game, win, and then go back to the beginning find a bracelet and rescue the princess again. So they send you back to the beginning and it’s even harder.”

Muneshine: “And even on easy it’s hard.”

Chase: “I had a cheap version of that for my Commodore 64.”

Ghettosocks: “It’s probably ‘Ghosts and Goblins.’ It’s the earlier incarnation. Easily confused. Anyhow, you start the game again and you go all the way through again. You get to the final boss and you have to use a certain weapon. You can’t use your gold armor, heat-seeking crossbow. You have to use this stupid bracelet fireball. I have yet to beat it. Every time I’m in Toronto between shows or recording hot new bangers, I’m playing ‘Super Ghouls and Ghosts’ for Super Nintendo and I will beat it some day. Matter of fact, anybody out there who has beaten this game. Hit me up. Go to Ghettosocks.com and send me a screen cap. I want to see what happens when you beat the game.”

Gamma Krush: “No matter how hard the game is. They have that stuff.”

Muneshine: “So we shouldn’t engage the listeners then? We should just go on YouTube.”

Ghettosocks: “You’re blowing this for me Gamma Krush.”

Muneshine: “You blew it! Gamma Krush is krushing it!”

Gamma Krush: “So you really have an old school style arcade in your living room?”

Ghettosocks: “Go on to YouTube. Check out ‘Treat of the Day’ episodes. There are six episodes. All of them showing me playing an arcade game, and that’s an actual arcade game that is in my living room?”

Chase: “Let’s drop another track and come back and talk with you some more. I want to play ‘Ricochet’ because that’s a dope track.”

Chase; “All right, Gamma Krush is gonna spin that and we will be back with more from Ghettosocks, Muneshine, and DJ Irate here in Hess Village.

Download this show for free, stream it with the player below, and come back tomorrow to read the conclusion of this interview.

Summer to Snow – Enjoy the Show