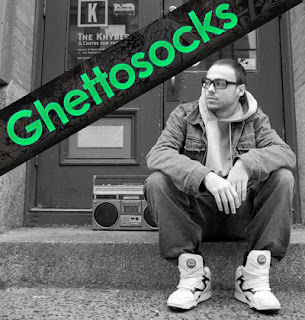 Ghettosocks: “All right, we’re back.”

Back with our exclusive interview of Ghettosocks for DOPEfm. Download it for free, stream it with the player below, or keep reading.

Chase: “One last note, about your unique style.”

Ghettosocks: “I’m wearing Frames, glasses that were hand made by my homeboy BJ. Big ups to BJ, Big ups to Keith Relic and the whole State Family Guilds. They sponsor me and give me gear. I wear lense-less glasses. I’ve been wearing them since junior high school. I began wearing them as a social experiment to see if I’d get better grades and it worked. Here I am now, still applying that science and dominating the world.” That’s right. Dominating the world.

Hope you enjoyed this podcast.

Stay tuned for more of the best in underground hip-hop each and every week from DOPEfm.