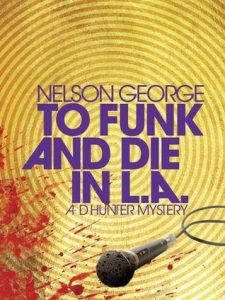 To Funk and Die in LA: A D Hunter Mystery by Nelson George

I am not a big fan of the mysteries. In fact, this is the first novel in the genre that I have read in a really long time. I decided to give the book a chance when I was given the opportunity to receive a review copy. After all, Nelson George has written books on hip-hop and wrote the introduction for another book reviewed not too long ago, What is Hip-Hop?

The story revolves around the death of the main character’s grandfather, Big Danny. There are a lot of questions to be had around his death. Why would someone shoot an old man? He was the owner of a grocery store and did a lot for the community.

D Hunter goes to Los Angeles to pay his respects to the man he was named after and starts to uncover all sorts of things about his grandfather. In a side-story, a reclusive musician attends the funeral and a YouTube video sparks interest in a possible career revival of Dr. Funk.

Like I said, I am not a fan of this genre, but I do like a story that has hip-hop sensibilities. Dr. Funk’s journey is pretty cool and might have been an even better story without the main narrative being a part of it at all. He seems like a George Clinton / James Brown kind of figure who is larger than life and really respected but who completely disappeared years and years ago.

This is the fourth novel in the series but you don’t have to read the other ones to follow along with the story. It is a stand-alone that works well, for the most part.