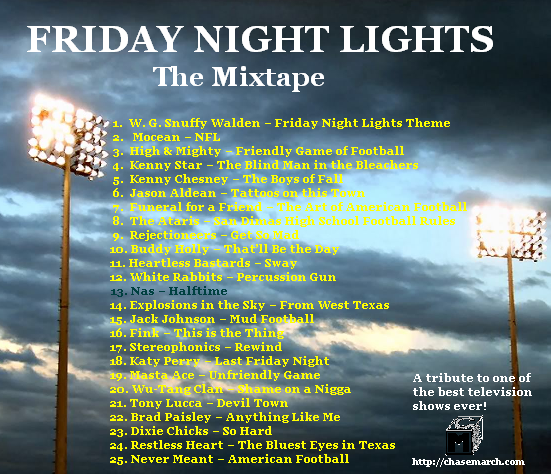 I wanted to pay tribute to one of the finest television programs I have ever seen.
Friday Night Lights is set in a small Texas town that is completely dedicated to, and obsessed, with high school football.

I never watched the show during its original run but I recently discovered it on DVD. By the third episode I was completely hooked.

I really enjoyed the writing and how it helped develop a wide range of characters. For a show about a football team, the town, the coach and his family, it could have easily been filled with cardboard incidental characters. But you really get to know and come to love the characters on the show.

As I got closer and closer to the final episode, I was sure I’d be sad to see the series come to an end. But it had such a powerful finale that was completely perfect and in tune with the essence of the series. As such, Friday Night Lights has made its way in to My Top 10 Favourite TV Shows of All Time.

Almost as soon as I’d finished watching the series, I started thinking about this mix. I did some research and found quite a few songs about football that I had never heard before. I also added a few songs about Texas, and one about a small town that sounds a lot like Dillon, Texas.

I hope you enjoy the mix. It seems that I’m working on creating an entire series of tapes based on televisions shows. It started with Lost, moved on to Doctor Who, and finally made its way to the football field for Friday Night Lights.

Here’s the song list. Each track blends into the other, in true mixtape fashion. It was a bit of a challenge considering the wide range of musical genres here, but it turned out better than I could have imagined. I love this mix and I hope you will too.