They say a picture is worth a thousand words.

Let’s see if that is true.

I found this image on Tumblr and absolutely loved it. 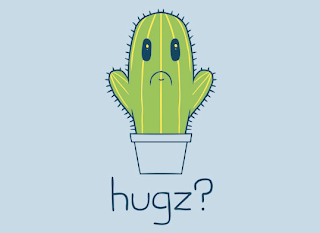 Image via SnorgTees
I then heard about this thing called Friday Flash. The goal is to write a short story and the only limit is that you cannot use any more than one thousand words. You can find #FridayFlash stories by using the hash tag on Twitter.
Here is my first attempt at a Friday Flash. I hope you enjoy it!
The Lonely Cactus
by Chase March

JC thought everything would change that one fateful day when someone came to his dry landscape and plucked him from the desert. The teenaged girl looked quite beautiful as she worked carefully to dig him out and place him in a planter pot.

“I’m free! Free to go anywhere you’ll take me!” screamed JC with sheer delight.
She took JC and put him on the floor of her car. He had never been in a car before. Up until this point, he’d never been anywhere before.
He wished he could see and asked the girl if she could move him up to the seat.
“Sorry, you’re going to have to stay on the floor,” she said to JC, even though she hadn’t heard him. After all, she didn’t speak cactus.
JC thought they had a special connection and that they completely understood each other. How was he to know that people just talked to plants and didn’t actually hear their responses?
He told her all about his life. About how the sun arced across the sky each and every day and painted a moving shadow across the desert. He told her about the time a hyena had chased a small rodent across the sand. About how the rodent tried to throw him off by running in a strange zig-zag pattern and ducking behind him. And about how bad he felt that he couldn’t help protect the little guy.
The car hit a bump in the road and the pot left the ground briefly.
“Hey, I’ve never jumped before,” said JC. “That was cool.”
The girl looked down at him to make sure he hadn’t tipped over.
“Sorry about that bump,” she said.
“No worries,” said JC. “I can jump. Watch this.”
He jumped again. This time the car hadn’t hit a bump. It was the first time he’d ever jumped.
“Thank you for this fun adventure, Miss?”
She didn’t answer him. He so wanted to know what her name was. Maybe she was just focused on the road. Too focused to answer him.
The car soon came to a stop in a driveway. She reached over and picked him up. He was very curious to see where they were going. He didn’t recognize anything. He certainly wasn’t in the desert anymore. There were tall trees lining the sides of the road. Not one cactus was in site. These trees had large green leaves and not spikes. He thought they looked a bit scary and was glad he didn’t have to talk to them.
The young girl brought JC inside her house and put him down to rest on the windowsill. He noticed another potted plant a few inches away from him. 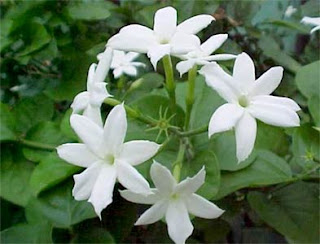 Image via Jintu
“Hey how’s it going?” he asked.
The girl leaned over the plant and deeply inhaled.
“Hey, she never did that to me. How come?”
The girl turned and walked down the hallway before the plant answered him.
“She likes how I smell,” said Jasmine. JC noticed that she did smell good. She also had beautiful white flowers.
“Do you know what her name is?” asked JC. “I asked her earlier but she must not have heard me.”
“Silly Cactus, she doesn’t speak plant.”
“But she answered me a couple times.”
“That’s just ‘cause people like to talk to plants. I’m glad they do or I’d be really lonely just sitting here.”
“I used to be lonely,” said JC. “Did she?” He waited to see if Jasmine would answer his question.
“Amy,” said Jasmine.
“Did Amy,” JC paused. He liked that name. “Did Amy rescue you from the wild as well?”
“No, she bought me. I was already in this pot.”
Just then, a cat jumped up on the couch and peered over at the windowsill.
“Hey, buddy,” said JC.
The cat sniffed the new arrival. JC thought he looked cute and cuddly so he reached out to hug him. The cat didn’t realize what was happening and didn’t have time to pull away.
JC was right. This was a cuddly animal. His first hug felt really nice… for a moment or two. But then the cat yelped as JC’s spikes jabbed him in the side.
The cat jumped back in pain and knocked over a candy dish. Amy came running out of her bedroom to see what was the matter.
She said, “Bad Buster” and swatted at the cat.
“Don’t be mad at the cat?” said JC. “It was my fault.”
Amy looked over to JC as if she’d heard him. “Oh, I guess I should have warned you about the cactus. They can be a bit prickly, Buster.”
Amy picked up Buster and stroked his fur. He let out a purr and dug himself into her embrace.
JC looked at Buster with a look of jealousy. He wanted a hug like that.
Jasmine could see it in JC’s eyes. “Sorry buddy, but you’re just a cactus. People might like us plants but we never get any loving like that.”
“Never,” said JC.
He started to cry. He liked his new house and he really liked Amy. Jasmine was straightforward with him as well. But he wanted a hug. He needed a hug. He rubbed his eyes and stopped crying. He didn’t want anyone to see what he was feeling. He turned and stared out the window.
“Don’t worry JC,” said Jasmine. “Amy will take good care of you.”
“But what about hugs?” asked JC.
“Hugs are for humans or cats.”
JC didn’t think that was fair. He looked out the window and just happened to see a porcupine. “Now there’s a spikey person just like me.” 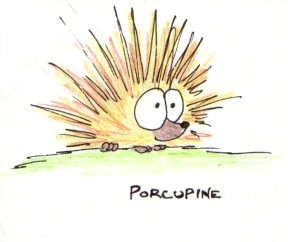 Image via BlueBison.net
He turned to Jasmine, “Think you could help me get outside one day to meet him?”
Jasmine said, “Who?” but quickly saw the porcupine, smiled, and added, “Of course JC. Just not right now. We’ll have to do it when Amy is out.”
JC looked out the window. He knew he’d get a real hug soon and he smiled the biggest smile he’d ever smiled in his life.

Double Spacing Between Sentences is Not Cool Anymore!

How Can Words Be Property?

Using Quotations in the Classroom