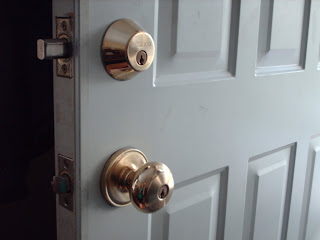 Locks only keep honest people out. That’s what his dad used to say and he never understood it. He always locked his door even though he wasn’t afraid of those honest people.
There were nights where he’d forgotten to lock it. In those mornings, his heart would skip a beat as he realized that he had been unprotected during the night. The next moment though he always felt relief that he hadn’t needed that lock.
His door isn’t locked right now. The screen door lets the cool spring breeze in and it feels good to have the freedom of an open door.
He’s been alone for years. Ever since she broke his heart. He knew that she might need the freedom of an open door one day. A place she could escape to if ever she needed it. No one would know about this place. She’d be safe here. That’s why he had insisted that she keep the key when she’d left him.
He hadn’t thought about that key in a while; it had been so long. She probably had forgotten all about it too. Perhaps things had worked out just fine with her and …
It still hurt to even think it …
him.
There, he completed the thought and then he rolled over and fell asleep for the last night he’d ever spend in this apartment.
The next day, he looked around at the empty digs before locking the door and moving on with his life.
She was nervous and scared to use the key after all these years but she did. She’d needed the freedom of the open door today. She wanted him to be there to tell her that everything would be okay. She needed him for that.
When she opened the door, her heart sank. Seeing the place empty at that moment broke her heart. She fell to the ground crying, closed the door behind her, locked it, and cried some more.

Artists Don’t Have a Never-Ending Well

We’re All Part of the Universe (Writing and Discussion Prompt)