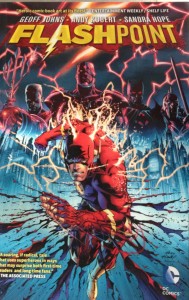 One day, Barry Allen is completely surprised to see that his mother is still alive. Everything in his universe has changed. No one has ever heard of The Flash. There is a huge war threatening the whole planet. And worse still, Allen doesn’t have his speed anymore.

Convinced that the Reverse Flash has altered the timeline somehow, Allen tries to recreate the conditions of the accident that turned him into The Flash in the first place. He gets his speed back and tries to restore the timeline.

This is a heart-breaking story that affects the entire DC universe. That is why there are some companion books and tie-ins to it as well. 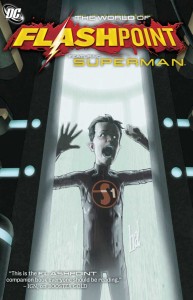 The world has not heard of Superman in this universe either. That is because the government captured him as a baby and has kept him locked up for years. He is a scrawny kid who has never seen the sun, and therefore never developed all of his super-powers.

The Flash knows that he needs Superman to help him set the timeline straight and stop the brutal war that is waging between the Aquaman and Wonder-Woman’s people.

But this is not the Superman he knew in the original timeline and things might be a bit harder than he thought to get him on side and fighting the good fight. 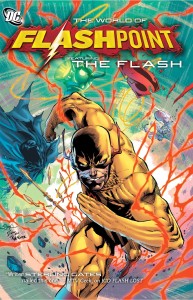 In the new timeline, Captain Cold is the hero of Central City and he is known as Citizen Cold. He gets his own story in this trade paperback.

Cyborg, ex of the Teen Titans, is Earth’s mightiest hero. It seems that he has taken the place of Superman in this new darker world. He does his best to keep the peace, but just can’t seem to mobilize all of heroes into one team.

But with Flash’s help, he gets Batman on side and they are set to get the world back to how it should be.

I really enjoyed the original graphic novel of this story. It was a great tale that was both heart-breaking and heart-warming.

I’m not sure the companion books were really all that necessary, but they are worth the read for die-hard DC Comics fans.

Shaping Our Story to Live a Better Life

Could This Really Happen?

Guardians of the Galaxy: Cosmic Avengers