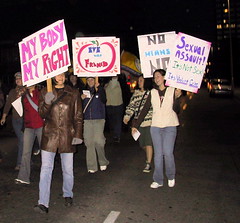 Last night I went downtown to support a friend who was marching in Take Back the Night, an annual event held in cities throughout the world. In it, women come together to stand up and speak out against sexual violence.

The event was held in Victoria Park in downtown London, Ontario. I got a great parking space where I could see a stage. I was also fairly close to the bandshell. I thought this was a perfect location in case the dreary weather we had been having all day would again rear its ugly head.

Unfortunately, the event didn’t take place on the stage or the bandshell. Instead, they had a very small, amplifier for a single microphone and everyone just congregated on the other side of the park right beside the fancy entrance way.

After a few speeches and a slam poetry reading, the women marched together from the park, to the downtown core, and back towards the park.

The women chanted in unison as they marched and cheered to break the silence and to feel safe from violence this one night of the year.

Men are not allowed to march with the women but are allowed to stand beside them by either waiting at the park, or marching along the sidewalks. I felt like should not march. I’m not sure why. Instead, I stayed behind and waited for their return.

The cold, dreary weather might have kept a few people away. I heard several women comment on how small the crowd was this year. This was the first time I ever attended the event in any city so I had nothing to compare it with. However there were dozens on women out in full force, with signs, posters, t-shirts with all sorts of sayings related to the cause on them.

For a man, I found it quite overwhelming. I can’t believe what some of these women have actually had to suffer through. I cannot image walking downtown and being afraid. It simply is terrible that sexual violence continues to occur.

I thought the cause needed a bit more awareness so I felt compelled to blog about it tonight. It would have been nice to see the women taking over the entire park, gracing the bandshell and stage area, and really making their voices heard.

I have to admit that I felt uncomfortable just being there. I felt guilty for being a man. But the truth is, I just felt ashamed that anyone could ever do such hateful, harmful, and selfish things to the women in our society. It really is sickening and needs to stop.

That Hurt! Ninjaz Take Out the Zombie (I mean, me)