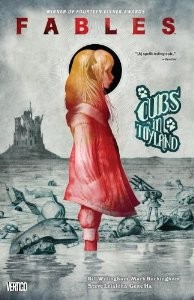 Volume 18 of Eisner Award winning series focuses on Therese, one of Snow White and Bigby Wolf’s young cubs. She’s not happy with the toy boat she got for Christmas. But one night, it starts talking to her and encourages her to take it to the lake. When she does, it grows to a full-sized boat and takes her to Toyland. At first, she is happy for the adventure but she quickly find out that the broken toys need her to be their queen and won’t allow her to leave.

Fortunately for her, one of her brothers followed her and is determined to bring her back home. When her father, The Big Bad Wolf, discovers them both missing, he stops at nothing to track them bothbles down. But he gets some very bad news on his quest. A soothsayer tells him of the terrible fate that awaits him. 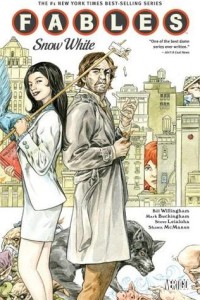 This issue collects the short series, A Revolution in Oz, before continuing the main story that got started in the last issue. It’s a humourous tale that starts with the Bufkin being hanged for treason. Fortunately the rope refuses to cooperate. It was treated with the powder of life by Bufkin’s girlfriend Lily and follows them around for the rest of the tale.

Meanwhile, Bigby Wolf crosses realm after realm searching for his lost cubs. Unbeknownst to him though, there is a very serious threat at home. Prince Brandish is back and claims that Snow White is still legally married to him. And no one is able to fight him off because of a spell that reflects any injury that happens to him right back onto Snow White.

Bigby returns home and the ultimate fight to the death ensues. Could the prophecy he heard last issue come true? 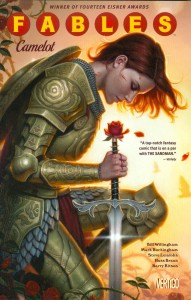 Snow White’s sister, Rose Red brings forth a new Camelot and begins assembling a new round table of knights to protect the kingdom. She enlists the help of Brandish and this puts a divide between her and her sister.

Meanwhile, Geppetto is scheming to find a way to get access to the Sacred Grove. He comes up with a brilliant plan that might just do the trick.

I have tried to do a brief synopsis here without giving away any of the major spoilers. Suffice it to say that I have really enjoyed all 20 collected issues of this series. The graphic novels are simply brilliant. They spin the magic and wonder of fairy tale characters into a very real and modern world. I highly recommend reading them. You can find them at your local comic shop or at the public library. Happy Reading!