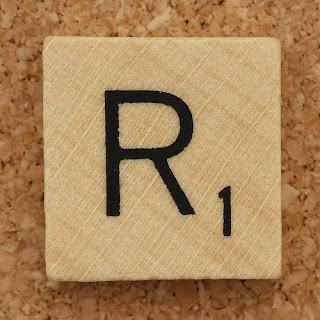 I like that my family played board games together. We played Uno, cribbage, snakes and ladders, chess, checkers, and Candyland.

But by far, my favouite game of all time is Scrabble. I’ve played it since I was young. My grandma really liked playing the game and I’m sure she humoured me back then because my vocabulary couldn’t have been good enough to hold a candle to her.

My mom, though is the one you have to watch out for. She is a really scary player opponent. You can never let her have access to a triple word or she will undoubtedly rack up a humongous score.

I remember one time playing against her and I could only think of one word that could possibly fit into an open triple-word score. I counted the tiles on the board as well as the ones in my rack and surmised that she wouldn’t be able to play there.

She would need an “r” and I had the last one. There were only a few tiles left in the game and I was ahead in the score. So I played somewhere else.

I then watched in horror as she placed her tiles down

“How could you possibly have an r,” I yelled. “I counted the tiles and I had the last one.”

We counted the letters again and sure enough, this game board had one extra “r” tile in it.

“How do you know you had the last ‘r’ anyway? Maybe I had it all the time,” she said.

Good argument there. But I was unwilling to lose the game on this technicality. I had her. I had been winning. How can she come along with an extra letter on the second last play of the game to win?

I knew that I had had only just recently picked it up but I didn’t want to admit it. I was furious. And I was a sore loser that day, that’s for sure.

It’s amazing how competitive I can become over a game. But this is more than a game. Always has been. It’s a place to play with words.

I love words and I hate when they fail me. Maybe I was mad that that particular word had crept by me. I had recognized that it would fit there, and next turn, I would’ve been in a position to play it.

It’s funny because this particular game was two years ago and the pain remains.

I hate that extra “r.” That was one crowded game board.

Everything is Awesome! (Do we overuse that adjective?)